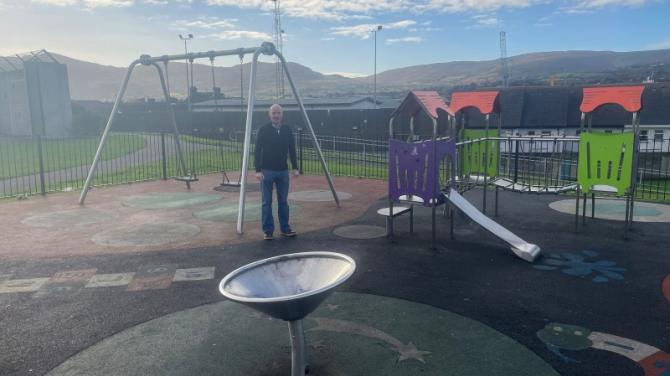 SINN Féin MLA Sinéad Ennis and Crotlieve Cllr. Mickey Ruane have expressed serious concerns about the rising anti-social behaviour in the Ringmackilroy Play Park which has resulted in vandalism and offensive graffiti.

The South Down MLA said:

“My office has received a number of complaints about deeply offensive and intimidating graffiti on and around the Ringmackilroy Play Park.

“The Ringmackilroy Play Park has become a facility for young people to congregate and drink, this type of behaviour is out of control and has resulted in vandalism.

“This behaviour is unacceptable, I appeal to those involved to think about the impact of their actions on the community, to the families and children unable to use the infants’ playpark and to those who live beside the park.

“I commend the speedy action taken by Council to remove the graffiti and the further measures they look to implement to make the play facilities more accessible for everyone.”

“The graffiti at the Ringmackilroy Play Park is unacceptable. This level of anti-social behavior should not be tolerated, especially in children's play facilities.

“I commend the council’s speedy work to remove the graffiti from the park and surrounding areas. I had the council out at a site meeting this week to discuss how we move forward.

“The park is an asset to the area and those who use it should be able to use it free from intimidation. Many kids and teenagers use both the grass and hardstanding football pitches and the ball wall for their enjoyment.”

“I proposed a number of measures to improve the overall environment of the park, and to ensure the infant play park is fit for purpose.”