Monastic Sister says it's nonsence that St Brigid was a Goddess 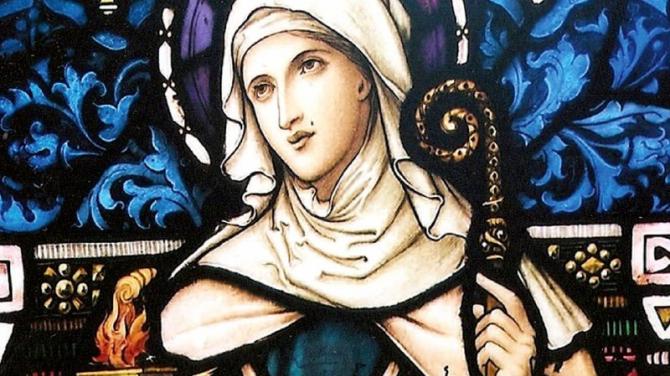 MOVES to celebrate St Brigid as a Celtic goddess who practiced abortion and lesbianism are misguided, says the founder of a monastery at the saint’s birthplace.

Sr Briege O’Hare, a Poor Clare from the Order of St Clare at Faughart, County Louth said this was the agenda of a vocal minority and not the agenda of the majority of people in Ireland.

“St Brigid is no goddess,” said Sr Briege. “She is saint of the Kingdom of Heaven…who was able immediately to work the miracles that were needed for us to be able to build our monastery.”

“And in the case of Brigid the concept of associating the spiritual closeness of a soul friend with the carnality of lesbian is just plain nonsense and it is just not true and it is also a terrible perversion of a wonderful gift of God so it makes me sad.”

Speaking to The Saint Patrick Podcast in Dundalk where St Brigid is buried, Newry born Sr Briege enthusiastically welcomed the proposal to have a national holiday February 1st, the saint’s Feast Day. “I would like to see Brigid celebrated for what she is, what every saint in the church is - an icon of Christ.”

While the Taoiseach has not confirmed the proposal to mark St Brigid’s day, Sr Briege said that those pressing the issue were honouring a Christian saint “whether they liked it or not.”

Sr Briege said Brigid was the founder of women’s monastic life in Ireland and it was sad and laughable that this Christian saint was a goddess, or engaged in abortion or lesbianism.

Sr Briege explained that the saint was said to have performed a miracle where she prayed over a nun in her monastery who had fallen into a love relationship and became pregnant.

“Brigid did pray over her body and the pregnancy disappeared but it didn’t mean that she aborted a baby. It’s just that someone how or other a miracle happened, and a baby wasn’t there anymore. I wouldn’t explain it in terms of abortion. Absolutely not.”

She added that Brigid was also responsible for identifying one of the “greatest principles” of the Christian way of life, the idea of a soul friend or in Irish “anam chara.”

“She always said no one walks the Christian path without a soul friend and it is intended that you always have another Christian a friend of your soul to reflect back to you your own truth about yourself .”

She said Brigid had the extraordinary gift of a soul friend in her spiritual journey of life.

“The whole concept of a spiritual journey is a transformation of our human physical self as well as a our spiritual self, and so the physical self becomes purified so that we can see God everywhere and that is in fact one of the gifts of the spiritual life.”

Sr Briege said Brigid was the daughter of a Christian slave, and a pagan father who may have named her after a Celtic goddess. But she insisted the name Brigid had since been Christianised by the holy life of the saint.

Sr Briege said she and four other Poor Clares experienced the miraculous power of St Brigid when they were seeking a monastic settlement. She said two religious sisters in different parts of Ireland told the Poor Clares to go to Faughart as “Brigid is calling.”

Within hours of their visit, Sr Briege said they received a phone call from someone offering the 2.5 acres on the site and within two weeks someone she had never met offered around half a million American dollars enabling them to start building.

The Poor Clare monastery in Faughart was built in 2004.

The podcast is available on www.saintpatrickcentre.com