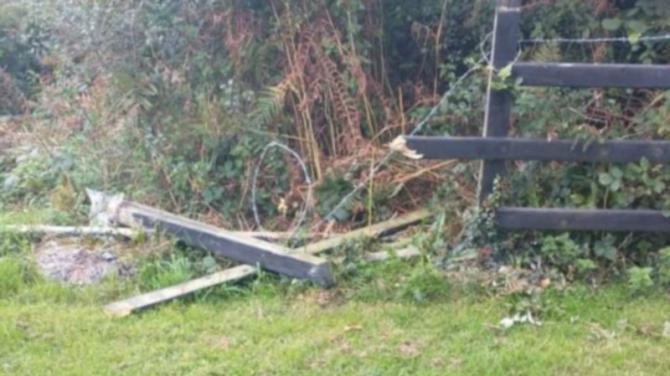 THE Millburn United football club committee has publicly condemned a string of vandalism incidents that have been ongoing at their club site close to Warrenpoint for the past several months.

The incidents in question have involved vandals breaking into the clubs pitch and causing extensive damage to state of the art bench dugouts that have only been recently installed as well as destroying an eighteen-foot perimeter fence that was put in place by financing raised by the club through community fundraising events.

Commenting on the damage wrought to the club site by the unscrupulous individuals involved in these wanton acts of destruction , a spokesperson for Millburn United has stated that the incident s of vandalism have now become so frequent that “those involved in breaking into the site are doing so on a weekly basis”

“The incidents of vandalism at our club pitch have now become so frequent that those involved are now breaking into the site on an almost weekly basis. Those involved are smashing the Plexiglas covering around the bench dugouts as well as lighting fires both inside and on their roofs.

“Although problems like this recent incident of vandalism committed on the dug outs have been ongoing for a while now, over the past two months the issue has gotten progressively worse. We only had this new state of the art dugouts installed in August and since then they have been vandalised on three separate occasions.

“Also following one of our clean-up operations we found a bag of drugs on the site which was subsequently removed by the police. We also frequently find remnants of drugs in the dugouts. Without being crude, we also found a used condom on one of these sweep and clean operations as well.”

The clubs spokesperson is also keen to highlight the fact that the dugouts have not been the only facilities on the site that have been targeted by the vandals, with an eighteen-foot perimeter fence surrounding the club also falling afoul of the nefarious deeds committed by the intruders.

“There was an incident of vandalism previous to this one in which people broke in and kick out the eighteen foot of fencing around the pitch that we held a fundraiser to help put in place. We placed this fence in ourselves and spent a few days painting it all at the cost of the club only to then have someone go up and kick it out of the ground.”

The spokesperson for the committee that oversees the administration of the club is also of the belief that those involved in these callous acts of destruction are deliberately arriving at the club site with the full intent of what it is they are going to do already planned out in advance.

“Milburn United's club is somewhat out of the way so we cannot understand how people could just walk up to where the club is situated. We can only speculate that people are driving up to the site to deliberately do these types of things.

“We consulted with the police and they said that they would make enquiries and ask for CCTV from the owners of the adjoining business units near the club to try and identify those involved.”

Apparently, these ongoing incidents of vandalism are not the only problems that the club faces, with the fact that many people are walking their dogs on the club's pitch grounds also creating problems for the organisation whenever they are hosting matches at the site.

“In addition to these incidents of direct vandalism people are also continuously walking dogs on the pitch who are fouling in the grass and over the past couple of weeks the referee has had to halt matches on three separate occasions because we have had to run onto the pitch to remove dog foul.

“These ongoing incidents of vandalism and disregard for the club's welfare have left us feeling sick as an organisation. We are just a small group of volunteers trying to give young people in the community an opportunity to play football and then we have these individuals coming in and damaging our facilities.

“Considering the amount of money it takes to run the club, this simply is not good enough. The Milburn United committee is composed of six or seven individuals who run the club and, in some cases, we are giving up every night of the week to help maintain and support the club so it is extremely frustrating to see such a callous disregard for the work that we do as an organisation to bring football into the community. In short incidents of this nature have to stop.”