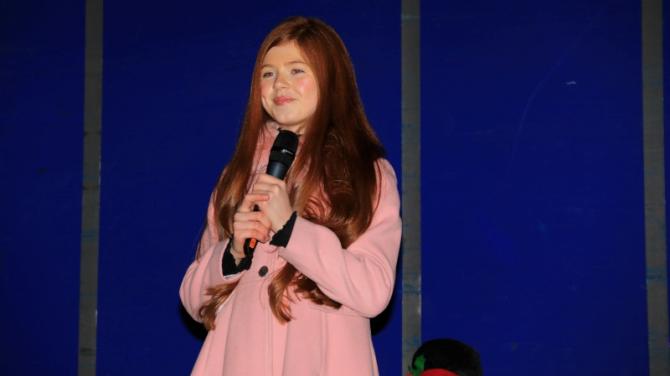 YOUNG Soaring Star Sophie Lennon can add another notch to her belt as a perfomer after having meet her hero Ed Sheeran at The Late Late Toy show.

Sophie, who also graced the crowds at the Warrenpoint Christmas lights switch on with near angelic renditions of songs such as Oh Holy Night and Hallelujah, met her idol after just before she performed live in front of millions nationwide as part of the singing cast of The Late Late Toy show hosted by RTE’s own Ryan Tubridy. Sophie described her meeting with the musician as an “absolute dream come true”

“While we were back stage preparing for The Late Late Toy Show I got to meet Ed Sheeran in person, which was an absolute dream come true.

“He is really nice in person. He allowed my friend to hold his guitar, which had his name written on it.”

Despite her very hectic and strenuous performance schedule, which would leave some other people of Sophie’s age feeling tired and drained, the young musician states that she “loved the whole experience” of meeting her idol and turning on the Warrenpoint Christmas lights only one night after having sang both the opening and closing ballads on one of RTE’s most critically acclaimed and highest rated television programmes.

“I sang at the Warrenpoint Christmas Light switch on the night after I performed on The Late, Late Toy show. I loved the whole experience. I sang Oh Holy Night, Hallelujah and I want a Hippopotamus for Christmas. The turning on of the lights went really well, it was freezing though.”

Thanks to the number of previous performances delivered by Sophie in which she has held audiences in absolute awe with her seraphic singing talents the young performer has already accrued quite the following of adoring fans, evidenced by the fact of Sophie’s Mother Theresa relaying the fact that families came as far afield as Belfast to see her young daughter in person.

"I would say that there were easily one thousand people there in attendance, we weren't sure how many people would be there because of the weather but there was a good turnout.

"People were coming out of the crowd asking Sophie for her autograph. There were a lot of children who saw her on the Late Late Toy Show who came over with their parents to take photos with her . There was a family that came as far from Belfast to see her as well."

Although Sophie may have now ascended to the level's national stardom thanks to the outstanding performance that she delivered on The Late Late Toy Show, along with Hilltown’s Shannon Copeland, the young singer claims that she did not initially understand just how many people she would be performing in front of.

“I really enjoyed singing the opening and closing ballads on The Toy show. The experience was amazing and the performances all went really well.

"If possible, I would love to perform on next year's Late, Late Toy show as well

“ Like I said while we were back stage preparing for the show I got to meet Ed Sheeran, which again was an absolute dream come true for me."

He is really nice in person. He allowed my friend to hold his guitar, which had his name written on it. I also made friends with another Girl around my age called Una who played the Harp.”

After having performed in front of millions on national television, naturally the next stage in Sophie’s progression as a musician will no doubt be to release an album with her musical talents recorded onto it. According to Sophie’s mother Theresa, such a project is “in the pipeline”, with such a release date possibly set for next year.

"Sophie possibly recording an album is currently in the pipeline, perhaps it will be released next year. We have been so busy at the minute but it is definitely something we will look into.

“She is heading over to London this Friday to perform in the Lyric Theatre. Sophie will be singing solo and she is really looking forward to it."

“She has also been short-listed for the BBC soloist of the year competition which will be broadcast on the radio.”Theresa concluded by saying that sophies performance on TV is something that “she will never forget.”

“As a mother Sophie’s performance live on stage at The Late Late Toy show is something that I will never forget.”