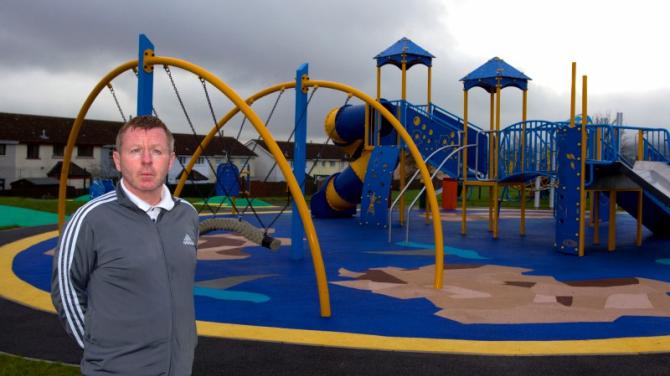 RESIDENTS of Loanda Crescent Newry have expressed their distress following the discovery of an infestation of rats in a patch of council owned property between the housing estate and a local playpark.

The rats, which have been seen both within the playpark and the plot of council property are now beginning to approach local residencies within the estate, with many now fearing that they could enter properties and potentially wreak havoc.

One resident who did not want to be named related how he managed to kill four of the rodents with his own traps after being informed of the presence of the pests by a neighbour.

"The rats have been seen in the area for the past week or so. They have been seen around the playpark and throughout the general area. There is a litter collection in the playpark on a regular basis but not around its perimeter. I cannot speculate as to how many rats have infested the area because I was first alerted to this issue by my neighbour who warned me to keep my doors closed in case they get into the house. Another neighbour has also informed me that they have also killed two rats at their home.”

"In response to the problem I set a series of rat traps and within the space of thirty minutes I had already caught and killed a very large rat. Over the course of the day, I managed to kill another three. I was baiting the traps with peanut butter and they just kept coming. So, I have managed to kill four rats that were in close proximity to my own property which is located about 25 meters from the playpark . My property is concreated, with no visible means for the rats to get onto my premises.

After having contacted the Environmental Health Department in the council to inform them of the problem the resident was told that it wouldn’t be until after the weekend until the council came out and examined this issue.

“I contacted the Environmental Health Department in the council and they told me that it would take a number of days before they would send someone out to deal with this issue. I explained to the Department that the land in which the rats have infested is council owned property to the rear of Loanda crescent. The play park is located on this patch of land and it is only about 25 meters from the closest houses. I explained the danger posed by rodents and the contagious diseases that they harbour.

"I also explained that unfortunately, the solution is not as simple as laying down poison to kill the rats as young children frequently walk back and forth across this patch of land to the playpark where the rats have also been seen so we can't run the risk of one of the children picking up and consuming the poison. The council did have a dedicated pest control officer who has since retired and they were never replaced. They are almost putting the responsibility for dealing with the problem with the householder, telling us that we need to deal with the issue. The houses in Loanda crescent are in close proximity to council-maintained property so surely the council should bear some degree of responsibility in trying to deal with this problem.”

The resident has also expressed concern that the infestation poses the most risk to anyone in the estate that has young children in their care.

"God help anyone who has young children in their household here in Loanda crescent. Imagine if a rat does get into a resident's house, I mean it is bad enough having a mouse in the house, but a rat. Not only that but rats can multiply very quickly; I mean give them eight or nine weeks and they can have a litter of up to twenty pups.”

“After being informed of the problem of the rat infestation in Loanda Crescent Independent Councillor Gavin Malone contacted the Environmental Health Department to try and find a solution for the problem and was informed by a spokesperson for the Department that they are “going to send out two environmental health officers to see if any steps can be put in place to alleviate the problem. ”

Councillor Malone has welcomed this news from the Department stating that “hopefully it will enable us to get the problem resolved.”

“Once the Environmental health officers from the council come out to examine the issue at Loanda crescent, hopefully that will enable us to get the problem resolved.

When asked to comment as regards the presence of a rat population at Loanda crescent, a spokespearson for the council responded that “Newry, Mourne and Down District Council can confirm it is aware of the matter and an investigation is on-going. Therefore, no further comment can be provided at this time.”