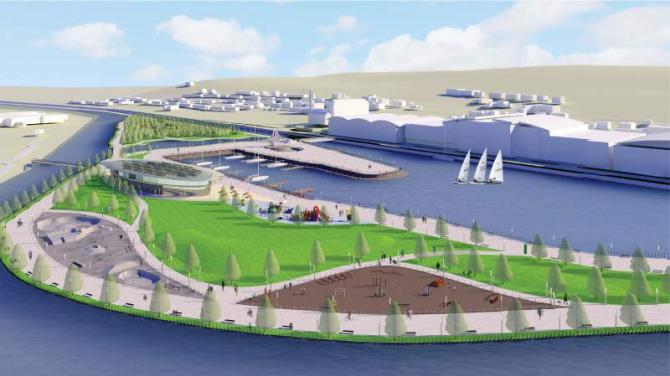 As much as 16.2million pounds has been earmarked by the Finance minister Conor Murphy to aid in the Construction of Albert Basin Park in Newry.

The investment comes as part of the N.I’s Executives City/Growth Complementary deal which is just one component of the Executives newly announced draft budget for the years 2022-25.

The budget, which has also prioritised spending on health and social care, makes specific reference to the much anticipated construction of Albert Basin park, stating that

“ £16.2 million will be provided by the Complementary fund towards the development of a 15 acre parkland and open space at Albert Basin park Newry.”

Expressing his enthusiasm for the amounts allocated in the City/Growth complementary fund, Minister Murphy stated that “these projects will help to provide a capital injection right across the North.

“I’m delighted to announce that £52 million is being allocated to projects under the Executive’s Complementary Fund. These projects will provide a capital injection right across the North. This will see investment in local communities, support for businesses and development of our local environment to provide much needed green space for citizens.”

Other projects that have been listed for funding under the city/growth deals complementary fund include the development of a £15 million hydrogen innovation centre at Ballymena , The establishment of an Industrial Development Challenge Fund to help close the productivity gap by providing support to businesses for product improving technology and as well as the development of a multi-use recreational and environmental facility at Whitespots Country Park, Bangor - £7.4 million

A 12 week consultation period on the proposals set out in the draft Budget will commence on Monday 13 December giving the public the opportunity to have their say.

Announcing the Draft 2022-2025 Budget, Minister Murphy said: “The Executive has previously committed to prioritising health and bringing down waiting lists. Therefore the draft Budget proposes prioritising health by providing additional resources to ensure the bids for the Elective Care (waiting lists), Cancer and Mental Health rebuild strategies are met in full. A health budget of £21 billion over the next three years provides a long-awaited opportunity for long-term planning, reforming service delivery, and tackling waiting lists on a sustainable basis.”

The Department of Health would see their budget increase by over 10% by the end of the budget period, when compared to the 2021-22 published budget position.

Turning to rates, Minister Murphy said: “Given high energy costs and the general cost of living crisis, regional rates will be frozen for businesses and households. The draft Budget is also proposing a £50 million rates support package for businesses in 2022-23. As Covid has impacted on all sectors of the economy, the proposed package would provide a one month rates holiday to all businesses with the exception of utilities and larger food stores and a three months rates holiday for retail, tourism, hospitality, leisure, childcare and airports which are the sectors hardest hit by the pandemic.

“To help tackle vacant properties in high streets the Back in Business scheme will be re-introduced on a more generous basis providing businesses occupying a vacant retail property with 24 months rates relief instead of 12.”Encouraging people to respond to the Draft Budget consultation when it opens on Monday, the Minister concluded: “With a three year budget it’s vital that people get involved and have their say. My Department will be undertaking engagement sessions in the coming months and I would encourage citizens, communities and businesses to have their voices heard.”