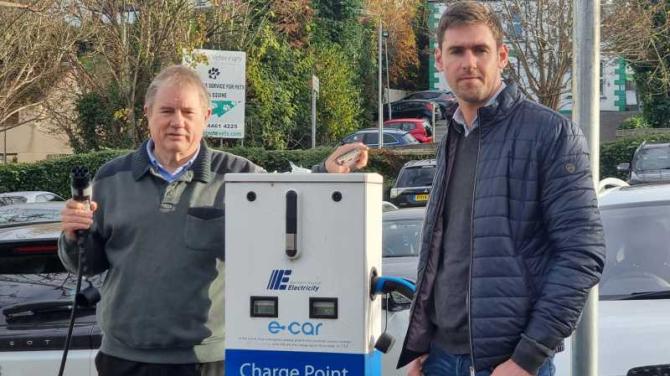 COUNCILLORs Patrick Brown and Cadogan Enright have made it their priority to “up the current” standard of infrastructure for electric vehicle owners throughout Newry, Mourne and Down.

Chief amongst the actions that the two environmentally conscious public representatives have taken to improve the currently existing infrastructure to for electric vehicles in Newry, which councillor Brown has described in his own words as “shocking”, are two motions to council that will champion the needs of electric vehicle owners throughout the area.

“The purpose of this motion is to incentives ownership of electric vehicles in the area to support a low carbon economy. The introduction of free car-parking for electric vehicle owners is one of a number of measures that local councils can take to help accomplish this goal. We would also encourage the council to introduce exclusive parking spaces for EV vehicles

“As a party Alliance is extremely committed to eco-friendly motions such as the introduction of free car parking for electric vehicles so this is why we released the green new deal document earlier in the year. Amongst the wide range of policies detailed in the document there is a lot of commentary relating to the facilitation of electric vehicles.

Councillor Brown was keen to provide further detail on this commentary which has the potential to also be presented to the council in the future. This includes the introduction of an interest free loans scheme which would see the government pay of any interest on a loan that an individual would use to buy an electric vehicle, with councillor Brown acknowledging the fact that although “electric vehicles are a lot cheaper for owners to run in the long-term, the initial capital to pay for them is substantially more than a car that runs on fossil fuel.”

“This is a model that has been tested in both Scotland and Wales and I believe that they could work out very well here. The way that the loans would operate is that they would be government backed similar to the bounce back loans we have seen throughout the pandemic. The government would essentially pay the interest on these loans through the bank on the behalf of the vehicle owner, with the capital itself provided to purchase the vehicle being provided by a credible financial organisation.”

“Although I am not an electric vehicle owner myself, personally I think the current infrastructure that exists to support electric vehicle owners throughout the Newry, Mourne and Down District Council area could greatly stand to improve. For example, my council colleague Cadogan Enright currently owns an electric vehicle and there is only one functioning charging point for him to use throughout the entirety of his Downpatrick DEA. There are other charging points within the DEA but they are currently non-functioning.”

The problem of their being a lack of charging points to power electric vehicles throughout the NMDDC area is an issue that Councillor Cadogan Enright intends to challenge head on, with the motion that he has drawn up specifically encouraging the council to “set a target for every car park to have one charging point within one year.” Councillor Enright also provided more detail on the severity of the problem, drawing attention to the fact that currently “there is only one functioning charging point for every twenty-five car parks” throughout Newry, Mourne and Down.

“If we do not increase the number of publicly available electric vehicle car charging points then anyone without a home charging point, especially here in the Downpatrick area which has a population of over 15'000 people and only one functioning working charging point , is going to find it extremely difficult to charge their vehicle.

Councillor Enright highlights the fact that not only will more charging points improve the livelihoods of those in possession of EV’S, but that the lack of EV charging points in the area may mean “that people travelling from other parts of Ireland may not want to come here.”

Council’s rate of provision for EV charging points is less than one tenth of one percent. Sales of EV’s locally seem to be running at an increasing rate at about 7%. This means that lack of public charging provision makes ordinary people without parking in their front gardens (a majority) excluded from owning an EV in our area. In view of our dependency on Tourism, not making EV points available means that people travelling from other parts of Ireland will not want to come here.”Furthermore If the council introduced EV charging points properly then it is an investment because they will receive additional income from people charging their electric vehicles. Some councils in the Republic are up to having 25 to 30 percent of their annual revenue income coming from renewable's so we are talking about very serious money here.”