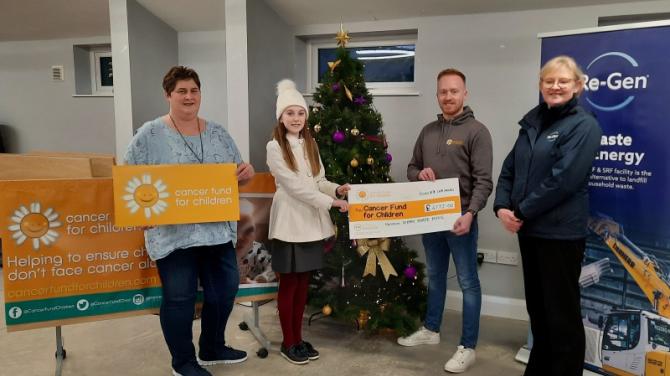 LISLEA born minstrel Niamh Noade can return to her home village with her head held high now that she has successfully raised no less than £4172.00 for Cancer Fund for Children through the use of her musical talents.

Niamh, who is currently a year 9 pupil at Saint Pauls High School Newry, travelled to London in September to record two self-written songs “Missing You” and “Friendships” which she has compiled alongside several other tracks in a new CD was recently sold at a launch event at the Lislea Community centre to help raise funds for her chosen charity that being Cancer Fund for Children, the UK’s leading national children's charity dedicated to fighting childhood cancer.

This event in conjunction with a live music event that was held at The Quays shopping centre in Newry in which Niamh played the harp for two separate sessions is what enabled the talented young musician to raise the generous amount of funds that she is now donating to Cancer Fund for Children.

When asked why she had chosen Cancer fund for children Niamh cited the overly long waiting lists that some children with cancer find themselves on as the motivation behind the decision taken to select the charity as a recipient of the funds generated through the sale of her new CD as well as the amount generated from her performance at the Quays shopping centre.

“I decided to donate the proceeds of my CD sales to the Cancer Fund because I really wanted to support a charity that helps children.

“I feel so happy that I have raised so much money for all the children who are helped by this charity and that I really hope that it makes a big difference.

"The launch event for my CD on the 20th of November went really well and we sold over 100 CDS on the night. We raised £3,500 on that night alone. I also raised £500 at the Quays shopping centre, playing for two half and hour slots. I really think that everyone in the Quays enjoyed me singing and playing the Harp."