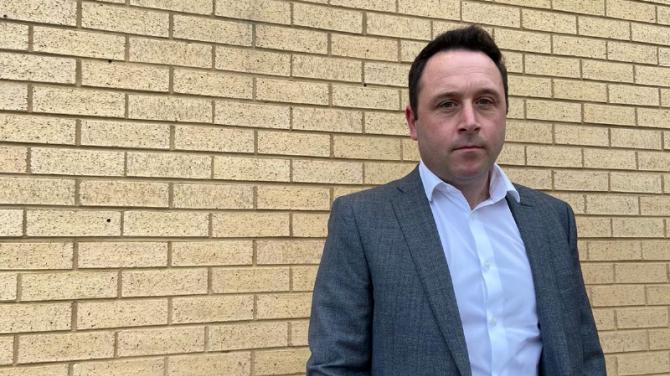 SDLP Slieve Gullion Councillor Pete Byrne has received an update from the PSNI on the implementation of the South Armagh Policing Review and has welcomed the completion of 16 recommendations to date.

Byrne said: “Over the last two years I have met regularly with PSNI officers overseeing and implementing the South Armagh Policing Review. At my most recent meeting this week I was pleased to hear 16 recommendations of the review have already been implemented including more on the beat officers and greater visibility with marked cars and cycle patrols. These short-term recommendations are already being felt in the community with work continuing on securing a third Neighbourhood policing team for Slieve Gullion, to allow better response times and engagement on the ground.”

“The location of Newtownhamilton Police Station remains temporary. I was updated on short-term plans to improve the look of the station by removing the militarised structure and reducing the height of the new perimeter, which will be more in line with stations elsewhere. Initial sketches are a big improvement, with the draft proposals presented to me including the removal of the bollards to open up the square initially with further place shaping proposals to follow.”

“The establishment of an Independent Advisory Group (IAG) is my most pressing issue as all of the longer-term recommendations will be filtered through it. We are aiming for the end of February 2022 to have the group up and running. The sale of Crossmaglen station lies with the PSNI estates team and future proposals will come back to the IAG. Both Crossmaglen and Newtownhamilton deserve a new beginning, free from fortified structures and relics of the past.”

“There has also been great feedback from the community regarding the Neighbourhood Policing response over Halloween with nearly £2000 of fireworks seized from minors and anti-social behaviour kept to a minimum in the town. Follow up engagement with parents alongside education through youth programmes will ensure this successful model continues in future years.”

“The SDLP continues to engage in this process as it has done over the last two years. It is through constant dialogue that we have been able to achieve the changes we have seen to date and we will continue to apply pressure to ensure all recommendations are implemented in the coming months and years.”