Alcohol pricing decision 'needs to be made' 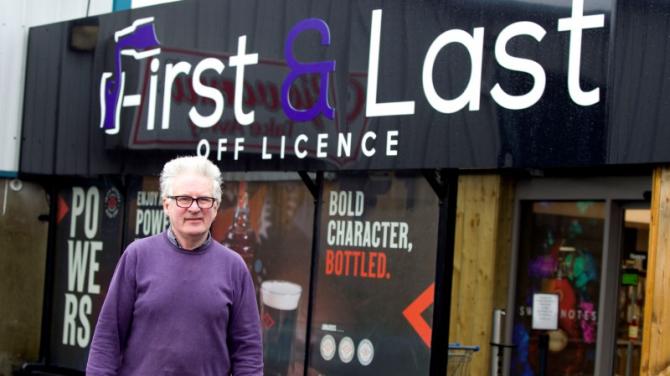 OFF licence owner Seamus McNamee believes the government needs to make a decision after the introduction of minimum alcohol pricing laws in the South.

The action has been taken to ensure that cheap strong alcohol is not available to children and young people at 'pocket money' prices and to help those who drink to harmful levels to reduce their intake.

Seamus McNamee knows that these rises will indeed be beneficial for his business, but he wants to it benefit the young people when brought into Northern Ireland.

Seamus exclaimed: "In the short term it's going to be good for us but also in the long term this has worked for Scotland and has proved that minimum pricing does work.

“A decision just needs to be made by the government. We should all be singing from the same hymn sheet and should have had it all brought in on the same day.”

The increase in pricing will lead to an increase in footfall for a lot of off-licence’s in the North.

“We are going to see an increase in footfall now, it won't happen overnight, after Christmas I don't think people will want to be stocking up the week in January/ February as they will be trying to get rid of what they bought before Christmas. “I know coming up to St Patrick’s Day and Easter we will see a ferocious increase.

“The increase in prices has worked in Wales and Scotland and so hopefully when introduced in NI it will encourage people to drink according to their means.

"At the end of the day cigarette prices have been increased and people still buy cigarettes. If two people in a household smoke, and each buy a packet a day it adds up. A packet of Benson cigarettes is 15 euro, that's 30 euro a day, 7 days a week is 210 euro, nobody would be willing to spend that a week. The same will apply to alcohol, people will just need to drink according to their means.

"It won't really affect off sales in NI, people who go into an off sale for four to five cans are not going to drive across the border, five, ten or 20 miles for that. Maybe if people will be d bulk buying for a wedding or something they will come North.”

CEO, Gerry McElroy of drug, alcohol and gambling rehabilitation organisation Cuan Mhuire, Newry welcomes the possible introduction of this law to NI and the prospects of battling alcoholism.

"Cuan Mhurie would be supportive of anything that would help in the reduction of harmful drinking especially with young people. Over the past number of years there has been an increase of young people trying to access our services, we have a very long waiting list still.”

“If these laws have been proven to decrease alcohol sales in Scotland and Wales then we would definitely be in support of it coming into act in NI.”

Amy Mcgivern (26) originally grew up in Burren, but over the past two years has relocated to Dublin for work. I asked will she now start buying her alcohol in Newry on her trips home and not pay the higher prices.

“The cost of living in Dublin is already so expensive that the rise in alcohol prices will be an unwelcome addition. Be it a night out on the weekends or having a drink in the house, both will set you back significantly. That’s why I usually go home on the weekends to Newry because it’s much more affordable.”

In 2020 Health Minister Robin Swann DOH committed to a public consultation on the introduction of minimum pricing for alcohol in Norther Ireland. A spokesperson from the Department of Health released a statement saying, "“The introduction of legislation for Minimum Unit Pricing (MUP) for Alcohol has the potential to be a key population-level health measure to address the harms related to alcohol consumption. To this end, an action was included within the new substance use strategy, “Preventing Harm, Empowering Recovery”, to launch a consultation on MUP. Work on developing this consultation is ongoing and it is anticipated that it will issue in early 2022.”