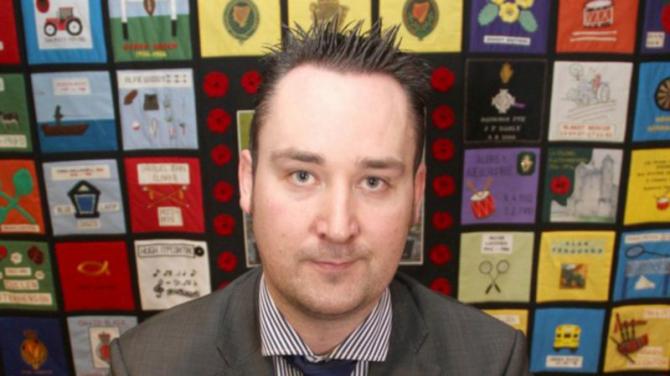 KENNY Donaldson, the director of the South East Fermanagh Victims foundation has had the contributions he has made towards the wellbeing of innocent victims and survivors of troubles related crimes formerly acknowledged through inclusion in the Queens 2022 new year's honours list.

Kenny, who is originally from Crossmaglen and a past pupil of the Royal school Armagh, has been serving the needs of the many innocent victims and survivors of troubles for the past 15 years in the numerous roles that he has held in SEFF, and thus has rightfully earned the Member of the British Empire Award MBE that his placement on the honours list has bestowed upon him.

Kenny was keen to recall the moment in which he learned that he had become a worthy recipient of the award, stating that upon opening the letter that contained the announcement he was simultaneously “shocked” and a “little embarrassed” and that he would like to thank those who nominated him for the award.

“I was shocked and a little embarrassed when I opened the letter and read its' contents. I feel deeply humbled that anyone would have thought to put forward my name in this way, and to those who did I would wish to thank very much".

Although Kenny does wish to express his sincerest thanks for those who nominated him for the award, he states that he is “not accepting the MBE honour” for himself but for “innocent vicitms and survivors of terrorism and other troubles related criminal violence.”

“However, I am not accepting this MBE honour for Kenny Donaldson, I accept it for innocent victims and survivors of terrorism and other Troubles related criminal violence; many of whom I have had the privilege of knowing over the past 15 years and more, through South East Fermanagh Foundation, Innocent Victims United and beyond and who have come from diverse ethnic and religious backgrounds; unified in their opposition to violence being used as a means to pursue or defend a political objective.

"I never cease to be amazed by the dignity and grace of those who have been so grievously wronged and for which no justice, nor accountability has yet followed. I don't view what I do as employment or as a job, for me it is a vocation and a cause. I am conscious that often people are acknowledged through Her Majesty's Birthday and New Year's Honours at the point of retirement or when a milestone achievement has been made. That is not the case with me, I am still very much part of the fight and there is much which remains to be done in ensuring that the integrity of victim and survivor experiences is preserved and that those impacted might experience a quality of life, we must get services right for such individuals particularly around the area of mental health". "I am also blessed to have really special parents who have always been there for me, as well as siblings and a wider family and some special friends and also neighbours who I grew up among in the Creeggan/Crossmaglen area, their support down the years means more to me than any block capped letters".

"Her Majesty Queen Elizabeth II is someone who I have always deeply respected and her dedication to Public Service is something which few will ever truly understand, has she got everything right in her long tenure as Monarch? I think she'd be the first to say, no I haven't. But that in itself is the essence of being human, none of us will get everything right, we make wrong calls and decisions along life's journey, but hopefully its' our character and our motives which ultimately will define us".

"It remains my privilege to be Director of Services for South East Fermanagh Foundation (SEFF) and to be afforded the latitude to lead operationally under the guidance of a supportive Chairman in Eric Brown who was one of three men to form the group back in 1998 and who has helped me in many ways in performing my role over the last 13 plus years.

"I am also fortunate to work with a committed team of staff and service providers, but also an army of volunteers in excess of 100 who are the fuel which keeps the SEFF engine running. But it is the special people (members and others we support) who allow us to share in their lives; often the most painful and intimate aspects that truly makes the work we do so rewarding.

"In recent years we have opened outreach offices in Rathfriland and also Bessbrook from which we deliver services to victims/survivors based within those areas.

Kenny states that although the new year may pose many challenges for the South East Fermanagh Victims foundation, SEFF will in his own words “continue to “face outwards and to further develop pour work in the broader community.”

"Looking forward to 2022 there are many challenges for SEFF, IVU and the constituency we serve including; the impending legacy legislation, the need for a resourced Regional Trauma Network to become operational, to secure progression on our capital build project at the former Lisnaskea High School site, to contribute to the new Victims Strategy.

“To see positive outcomes for those applying to the TPDPS (Aka Victims Pension scheme) and to continue to further professionalise our services across Northern Ireland, Republic of Ireland and Great Britain".

"2022 will also be a year when a SEFF delegation completes a good practice visit to Rwanda and we hope to renew our ties with Spanish victim's group COVITE through development of further joint projects and collaborative working".

"SEFF will continue to face outwards and we will also further develop our work in the broader community, working with the Schools, Churches and wider civic society, this would include promoting positive good relations within the full community to which we all are part".