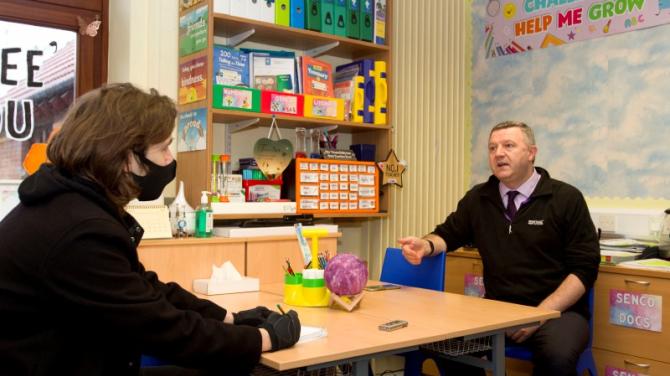 PRINCIPAL of St Ronan's primary school Newry Kevin Donaghy has stated that he believes the situation surrounding the spread of the Omicron variant of the Coronavirus in schools is, in his own words going to get worse in the new year.

Speaking exclusively to the Newry Democrat Kevin says he believes the situation is going to get worse for schools in the new year because: “If we listen to the CMO and chief scientific adviser they have said that we have not reached the peak of the wave of Omicron,” with Kevin also citing the phasing out of close contact tracing in schools and the removal of PCR testing as two key factors as to why he believes the situation regarding Copvid-19 in primary schools is going to get worse before it gets better.

“I would say the situation is going to get worse in the new year because if you listen to the CMO and chief scientific adviser they have said that we have not reached the peak of this wave. Here in St Ronan's, we have had five positive pupil cases in the last two days and that is more than we experienced even back in December. I would say that the situation is going to become a lot more difficult to manage.”

Kevin states that his main concern is whether or not individuals who test positive on Lateral flow tests will report these results to the health service, and whether or not this will artificially deflate the overall infection rate.

“The main issue that needs to be taken into consideration here is the gradual move away from PCR tests to Lateral flow tests. The question is if will people report if they have tested positive for the virus. So, the question is could this result in an underreporting of statistics coming through and people thinking that case rates are going down.

Again, I am not a scientist and I do not know the exact reasoning behind it the decision to move from PCR to Lateral Flow tests, but personally I think we should have stayed with using PCR tests. I also do think there needs to be proper contact tracing reintroduced into schools, especially primary schools.

Kevin is also of the belief that the current guidance for the management of Covid 19 in schools is outdated, and that the advice that is being issued in regards to the management of the Covid in primary schools contradicts the experience that he and his colleagues have had of actually witnessing the virus spread in the school.

“Currently the guidance still sates that it is uncommon for child to child and child to adult transmission taking place in school. However, what we were experiencing prior to Christmas and now is in school transmission, so the guidance is out of date.

“In primary school there is no social distancing taking place and mask wearing can become very difficult because a lot of young children find it difficult to interpret facial expressions if someone is wearing a mask. This becomes very difficult for younger children. Again, there is no close contact tracing.

Kevin is also of the belief that the Executive has been very slow to respond in their tackling of the virus in the school and that they have been taking more of a reactive as opposed to “proactive approach in their handling of the virus.

“I think the Executive have been very slow to respond, and that they are being reactive as opposed to being proactive. They definitely should have updated the guidance as well as having implemented proper ventilation in schools, especially primary schools. They should have also sorted out the supply issue, because they know that there are no supply teachers available and they have been warned about this from October time.

“They were only writing to retired teachers to come back on board at the end of December. There are a number of teachers in EA, DE and the CCEA who could be released to support schools and they have not acted on this. They also need to have proper contact tracing brought back into school.”