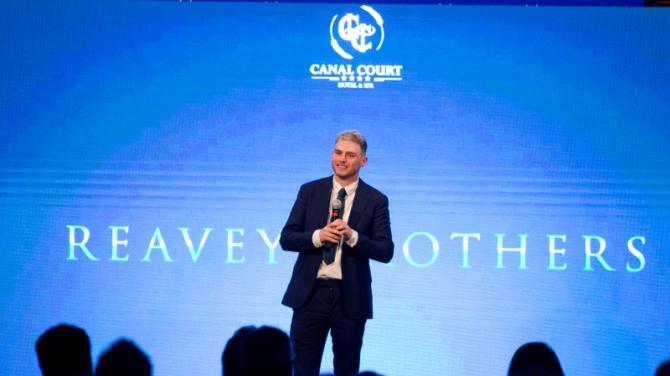 WRITER and director of the Reavey Brothers film John Reavey was overwhelmed by the reaction from viewers and grateful for the reception by family members after making the big screen debut.

Two sold out nights in the Canal Court Hotel gave those quick enough to book tickets the chance to watch the emotive film as well as take part in question session with the cast and crew.

“To see the family react the way that they did and embrace the project, it is the best feeling in the world. And for people to feel a sense of comfort watching this, I feel like my job is done properly.

“I really wanted to create this image that I have always had of my uncles in my head. Growing up I wasn't lucky enough to know who they were, I wanted to paint a picture of them for audiences around the world. And I am so privileged that the Reavey family allowed me to do that.

“The first time my dad saw the film was at the premiere and seeing all of their faces during the scene at the end and their expressions I knew I had hit their emotions the way I intended to.”

Reavey Brothers is a film about three brothers who were gunned down in their Whitecross home in January 1976 by the so-called Glenanne Gang.

It is a film that invites you in as you are invested in watching the brothers Brian, John-Martin and Anthony get on with life in troubled times. Dylan Llewellyn's portrayal as Anthony is moving and magnificent while Geraldine McAlinden who acted as the boys mother Sadie Reavey pitches the tone of the film beautifully.

The film is a powerful and wonderfully paced as Anthony thinks about his future with no hint of the tragedy to come.

Writers John Reavey and Jordi Estape Monts don't over complicate the dialogue, which allows the actors to deliver the story naturally.

Dylan is famous for playing the role of the only English person in the charmingly funny Derry Girls, but he was keen to play a role in this film and try to nail the Whitecross accent.

“I just wanted to give it my all for this project. It is so well written and it is great to be part of it,” Dylan said.

“Having lots of Irish friends helped a lot and doing lots of research on clips of the family and having the guys say the lines for me and then I would repeat them, so I could learn the accent and that helped. Hopefully I didn't butcher the accent.”

The ending of the film will stick with you because it of its brutality, but Dylan carries the weight of the performance perfectly. It is hard hitting and moving story, that's became too common in this part of the world and that needs a wider audience.

“As someone who comes from England, grew up in England, raised in England, we were never taught about what happened here,” said Jamie.

“What I really said to John [Reavey] is that I can't believe that I never heard about this before. And if I haven't heard about it then there are millions of people the same age as me that haven't heard of it and that is why we have to make this film.”

There is definitely scope for a bigger project, perhaps another film and Reavey his cast and crew would like to do more.

“We definitely crammed a lot into those 20 minutes and one of the big compliments I have got is that people have stated that it feels longer than 20 minutes, which is obviously a good thing to hear, because I have managed make everyone get on that journey so quickly. I have crammed in everything I could and I hope someone watches this and trusts me to tell a bigger piece or maybe tell even more of the story, because there is so much more left to explore.”

It was a fabulous setting at the Canal Court, with table service, plenty of screens and Damien McCullough was an excellent compère. Paul and Seamus Reavey spoke to the large audience as Denis from Peaceful Futures, all with stories that would break your heart.

There was music from Tommy Sands, Kevin Kearney and Belleek's Cathal Murphy and they were brilliant. Jarlath Burns said he would welcome showing the film at St Paul's High School Bessbrook and John said he would be delighted to take it to his old school and he was pleased with how the nights went.

“Visualising hundreds of people in the room is quite difficult and when you just see everyone looking towards you and the anticipation building, especially with such a tough topic,” John said.

“I definitely felt the pressure on but after the first night, we got into the swing of things and everyone has been supportive and congratulating me.

“I am so lucky and over the moon and very relieved.”

It is a must see film. You’ll not forget it.