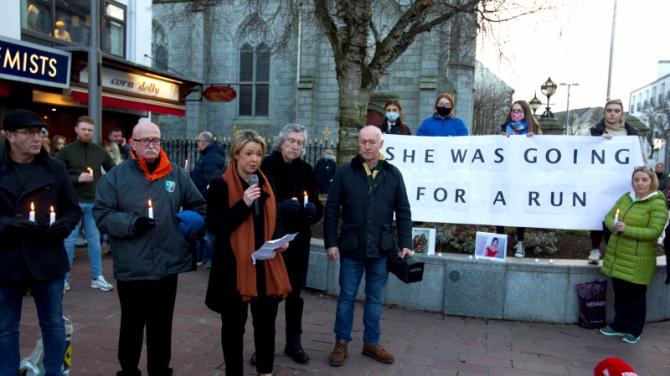 Thousands united at vigils all over Ireland in memory of twenty-three-year-old, teacher and talented musician, Ashling Murphy.

Ashling like many of us have done, decided to go for a run-on Wednesday afternoon, when she was tragically murdered along the banks of the Grand Canal in Tullamore, County Offaly.

The people of Newry gathered together for a vigil in Marcus Square on Friday at 4pm. The time was to coincide with the time Ashling Murphy’s life had been taken.

Ashling’s death has sent shock waves across the country ass a young woman with the brightest of futures ahead of her had her life tragically cut short.

I spoke with the vigil organiser MLA, Liz Kimmins on why she felt it was so important for the people of Ireland to unite at the vigils on Friday.

“The vigil is mainly about expressing solidarity with Ashling and all her family and friends.

“Ashling’s death initially sent total shock waves not just I suppose the community of Offaly, but right across Ireland and further afield to all women. I don't think there is anyone out there that hasn't been impacted by Ashling's death. It really is gut-wrenching.”

“The vigil is also to reinforce and emphasise the message that women should be able to feel safe every day going about their daily lives, free from the threat or from actual violence, abuse or misogyny, without having to feel we need to protect ourselves and take all these precautions.”

that the Stormont Assembly is active in this regard.

“The assembly has launched the consultation on developing a new strategy to protect women and girls from violence and domestic abuse which we had been publicising earlier in the week, and then we heard the news about Ashling’s death.”

“So much must change, and I know it’s not going to be easy. We need to make tackling domestic abuse and violence against women a priority.”

Niamh McGivern (24) from Burren spoke to me on how the death of Ashling has had an everlasting impact on herself and young girls all over the Newry and Mourne.

“It is heart-breaking to hear of what has happened to Ashling Murphy, a woman around my own age. She had her whole life ahead of her and it has been senselessly taken away.”

The gardaí and the police need to do more to make sure our streets are safer- there have been too many times that defendants are dealt with leniently, not sufficiently investigated and often not even monitored upon release for sexual/ violent crimes and allowed to roam freely putting the lives of young women at risk.

“This is of course not the only problem- the issue lies with educating men on the danger women face daily and asking them to step up and speak out against this. The unfortunate truth is that every woman has been in a situation where they do not feel safe because of the actions of men. “Things needs to change. My thoughts and prayers are with Ashling’s family, friends, colleagues and students- may she rest in peace.”

The eerie silence of sorrow filled Hillstreet that Friday afternoon, but so did a sense of unity and support for Ashling and every woman who has ever been a victim of violence or domestic abuse. Our prayers and thoughts go out to Ashling's Murphy's family and friends from all at the Newry Democrat.