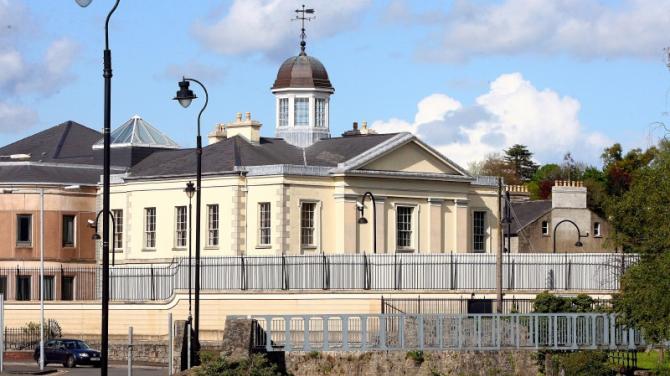 McNulty believes that the “present perimeter does not reflect the modern society in which the courthouse is located.”

The courthouse was designed by Thomas Duff, a Newry man, and was built in 1843 to replace a previous courthouse which was located on Monaghan Street.

The building was refurbished, extended, and fortified during The Troubles. In the past the building was the target of recent dissident bombings, although it is still protected with high street fences.

I spoke with Mr. McNulty to get his views:

“When you drive into Newry any day, the view is befitting of Baghdad, not Newry, I think it's intimidating, it’s the wrong image of the gateway count to our City Centre.

“Also, less intimidating to the people up in court as not everyone who stands up in court is guilty of a crime.

“It’s a fortified, militarised image almost, as opposed to open and modern, a society which Newry is.

“Every time I drive past it, it annoys me; we have offices across the road from it where I am looking out from right now, and it's just not a very modern look for our city.”

Mr. McNulty believes that the building has potential to become an inviting sanctuary for the residents of Newry:

“I would like to see the wall taken away and have walkways and gardens through it. There could be benches where people can sit and along the canal.

“They have militarised turn style gates upon entry to the building, it should not be as uninviting.

“The wall was designed to protect the building from bombings during The Troubles, and it did, but those days are gone.

“I think it’s time that the Justice Minister stepped up to make justice more appealing and make a more welcoming gateway to our city centre.

“At the crux of this is that Newry Courthouse should not be any more fortified than any courthouse across the north.

“The troubles are over. There needs to be more uniformity across the board in external treatment of courthouses.”