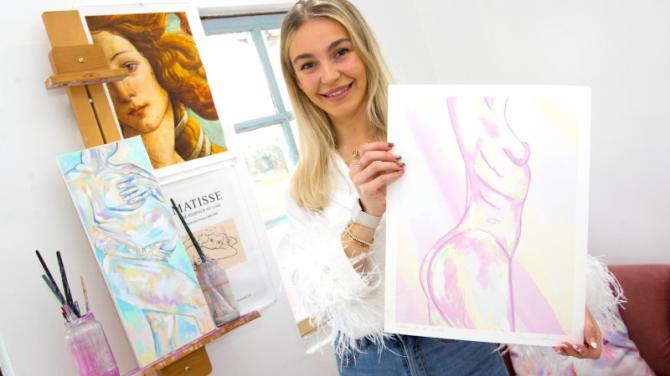 Female body empowering artist Cliodhna Doherty (27) has been awarded £1000 funding for her Intimacy Campaign by the Arts Council.

Cliodhna Doherty (27) from Flagstaff, is paving the way for young female artists with her new campaign showcasing Irish women and their bodies. What started off as a lockdown hobbie quickly evolved into something very special to women and young girls all over Ireland.

I was able to have proper chat with Cliodhna and to speak about her recent skyrocketing career and the positive message and meaning she wants her work to present to the community.

Cliodhna studied art in high school, but thought teaching was the safe route to go down, after three months she dropped out as she knew art was her true passion. Cliodhna then went to study her foundation degree in art and gained a degree in animation and design. One of Cliodhna’s classes was life art drawing, and she fell in love with it.

Cliodhna stated that: " In day-to-day life, everybody constantly judges people on their body shape or else you judge yourself but like from an art perspective you don't look at that, you are just focusing on the lines and the shapes, for a few hours nudity is not shameful."

"From there it’s kind of just skyrocketed, I kind of always knew I was going to go into it at some stage but I didn't know that it was going to be in the middle of pandemic."

Cliodhna has been inspired by women all over Ireland to take the leap and branch into her style of art after the huge positive response on her Instagram page,

" When you are an artist and you google female bodies, heavily pornographic images come up and I wanted to create something that was not heavily sexualising the female body. I had started using sketch examples from school and put some work on my Instagram and my following grew. I received so much support and praise from women. I then had women asking me to draw them, women who maybe had body dysmorphia issues or were pregnant. I then asked my followers on a poll, "Would you send nudes for art?"

“I received a huge response, I wrote back to the girls exclaiming my interest in creating a campaign with Irish women and their bodies, and I received over 120 images, it was insane!

“I think a lot of women realised that their bodies do so much for them over the pandemic. Women sent in their photos and a lot of them had stories to tell. The stories they told were inspiring."

Each piece of Cliodhna’s is so unique and vibrantly coloured, I was curious to know what influenced this.

"If you look like old renaissance paintings, they are really dark and painted from a man’s perspective and heavily sexualised. Whereas for me I really want my work to retain it's feminine and playful quality. I also don't use any black in my work.”

Sustainability is also at the core of Cliodhna’s business. She looks at different ways to make her art as eco-friendly as possible. Cliodhna only ever paints with paints that are guaranteed to last 100 years without fading. All of her canvases are organic or cotton linen. Prints, apparel and accessories are made to order to reduce landfill. Cliodhna has also branched into fashion designing and has her own clothing range which contain designs of her work, along with phone cases and variety of different apparel.

“Yes, so I’m waiting for samples to come back as I’ve a completely new range of clothing coming up. My customer base ranges from 26-45 and may have an income that is exposable.

“However, I also have young following from around 14-years-old who don’t have the income to buying paintings. I wanted to create an inclusive brand that allows everyone to buy art of some way shape or form. So, the likes of phone cases they are cheap and cheaper than paintings they can carry with them or my new apparel coming out has my actual art on it.”

Keep an eye on Cliodhna’s socials as she has an exciting line coming out soon!

Furthermore, with domestic abuse and violence against women circulating the media in recent months I wanted to ask Cliodhna how important she feels her art is for women who feel they cannot embrace their bodies or feel as confident as they should.

"Oh yes, it is definitely so important, there were girls sending in photos of themselves and their stories. Some had been sexualised at work due to the way that they dressed, or their ex-partners were abusive and wouldn't let them wear the clothes they wanted,” Cliodhana said.

“I think Ireland is still kind of backwards in terms of if you show too much flesh then you are classed a certain way and I think there are women out there that need to take that step forward to lead the way and I think many of them women have come forward for my project.”

Cliodhna’s art presents the real-life women of the world and not the airbrushed bodies that social media presents to young people. I wanted to find out if she feels this art is important for young people today in a world dominated by filtered photos.

“Absolutely, nobody looks the way they do on social media, and I have been in circles with huge bloggers, people don’t necessarily show the worst bits, everything is staged for the best photo. This campaign will focus on actual photographs, and you will see them on my page.

“These women have scars and bodies after having kids, I want to show organic unfiltered bodies. The filters on social now are insane. I have 14-year-old sister and you nearly have to sit her down and say this is not real life and show her my work and say this is real life.”

Cliodhna has had an incredible start to her career and no doubt much more success to follow. I was curious to find out what has been a milestone moment for her far: "Eight other female led brands and my myself opened a pop-up shop in Dublin on Exchequer Street last year, which was surreal. When I started this, I said that was one goal I would like to achieve in five years’ time, and I did it in a year! We featured in Goss and VIP magazine; it was insane.

“A dream of mine is to open my own store, to showcase my art and other women’s and hold workshops to bring a community aspect to my work, a safe space for women.”

Cliodhna’s art has been receiving huge amounts of love and support although because of the images her art showcases it does come with some challenges:

A lot of Instagram pages like mine don’t get the recognition they deserve due to the content. My page is constantly being blocked for explicit content and I know another girl who creates nude body shaped mugs and she faces the same situation. It’s crazy that I can promote a detox tea on my page that’s harmful for bodies and get hundreds of likes and followers but it’s not approved if I post a real woman’s body in a painting.

“Myself and another creator also had taken part in a documentary for a Belfast TV company and due to the nature of our work it wasn’t shown. “Yet, there are reality shows that are promoting surgery and unrealistic body standards to young girls. It really is crazy.

It has not been the easiest journey for Cliodhna to get here but she wants to encourage young people that have a real passion for art to take that plunge like she did:

"I was in my old job for five months and had no savings and I’m winging it every day. It was not until two years ago I finally got the courage to share my work. I’ve always been really hesitant that maybe there wasn’t a market for this art.

“If it's something your passionate about you just need to take that leap of faith and work on mindset, I read a lot of motivational books and spiritual. I was always questioned on my own sexuality as I painted women, always got slagged in my friend group or in school. You need to get rid of that fear."

Keep an out on Cliodhna’s socials as she has a new exciting line dropping this year!