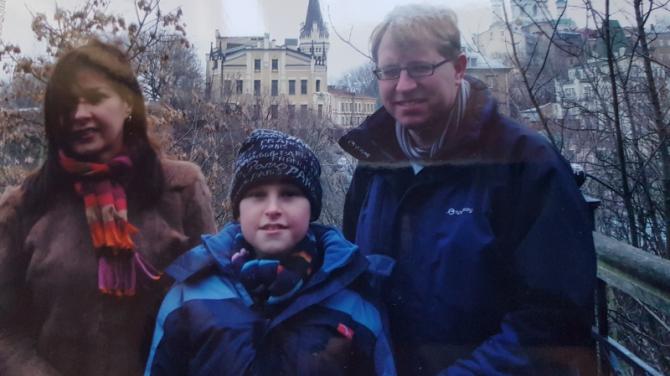 NATASHA STOKES, Ukranian national and wife of the currently serving Newry, Councillor Gary Stokes, believes that contrary to the ongoing media narrative, Russia has no plans to invade the mainland Ukraine anytime soon.

Natasha states in her own words that this is because “Putin needs a friendly Ukraine to act as a buffer between Russia and the West.”

After growing up in the Ukraine, Natasha now lives in Northern Ireland after having met councillor Stokes in 1994 while he was teaching English in Kiev.

After emigrating to Ireland in 1997, made the comment when asked by the Democrat to provide some insight into the ongoing escalation of tensions between the two nations that has been caused by Vladmir Putin's amassing of troops along the Eastern Russin Ukranian border.

“This is because war is not good for anyone and Vladmir Putin is not stupid. Even some Ukranian politicians are saying that Putin is a smart fellow so he will do not do anything that will harm his country because if there is bloodshed it will not be good for him because Putin needs to have a friendly Ukraine. He will not invade the Ukraine because he needs the Ukraine as a friendly buffer between Russia and the West.”

Natasha draws attention to the Russian annexation of Crimea in 2014 as a prime example of an opportunity when Vladmir Putin could have launched a full-scale invasion of the Ukraine and asks the question of why he chose not to when it was well within his military capabilities to assimilate the Ukraine back into the Russian Federation eight years ago.

"I mean if he really wanted to invade the Ukraine, he could have done it easily in 2014 because the Ukraine did not really have as large an army back then as it does now and he had a huge military advantage. Look at what he did in 2014 when he did have a military advantage, he forced the Ukrainians to sign the Minks agreement rather than invade.

"Also, I was talking to my friends recently in Kiev I asked them what life is like. Life has been going on in Kiev for the past eight years since the annexation of Crimea from the Ukraine. It is a city that is very much alive, with many restaurants, cafes and culture. They also told me all about the troops along the Russian-Ukranian border. The number of troops now estimated to be on the border between the Ukraine and Russia is now estimated to be 120,000, but it was 100,000 last Easter and Putin does have military drills and training around spring time.

"The minister of the Defence for Ukraine said himself that this is not a sufficient enough military capacity to carry out an invasion. The very minimum number of troops that Russia should have near the border with Ukraine to invade should be between 300,000 up to 500,000. This is what the Minister of Defence said. Other military experts on the internet also estimated that the number of troops currently stationed near the border is not enough to invade.”

Natasha was also keen to provide some insight in regards to what she believes Vladmir Putin's current motivations are in stationing troops along the Easter Ukranian- Russian border.

"I believe Putin moving the troops to the Easter Russian-Ukrainian border may be an attempt to force the Ukranian government to resume the talks concerning the Minks agreement that was made in 2014.

" However, having said this I am concerned for my relatives and friends in the Ukraine and I do feel sorry for them because the Ukraine is being used as a playing card between Russia and America.”