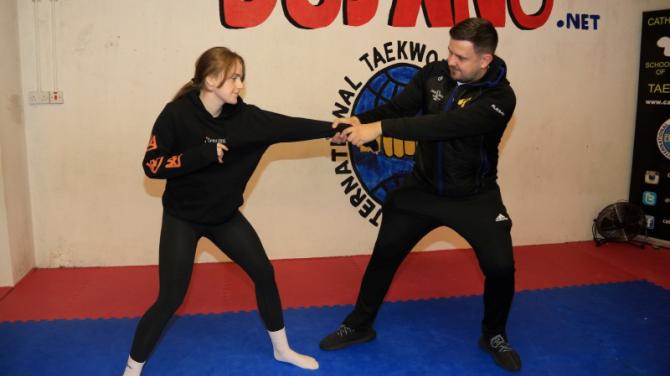 Self Defence and Martial Arts instructor, Cathal Fegan has launched female self-defence classes in the Newry, Mourne and Down District.

Violent crimes against women have been circulating in the news over the last year. This has given people like Cathal a sense of responsibility to share their knowledge and increase the safety of women from physical attack.

The owner of Cathal Fegan School of Taekwon-Do has been practicing Tae Kwon Do for 27 years and holds a 5th degree black belt. He hopes his classes will provide women with the basic skills to protect themselves from violent attacks. Classes will be starting from the 26th February in Newry, Crossmaglen, Mayobridge, Newtown, Dorsey, Silverbridge and a few more to be confirmed.

Cathal said: " After the tragic death of Aishling Murphy and then local occurrences around the area, I thought it was an opportunity for the community to embrace self-defence . I contacted the Assistant Tourism Officer at Newry & Mourne District Council, Michelle McKeown and she was more than happy to get something going within the areas.

"Michelle has contacted all the community groups within the district to see if they would be interested in signing up. At the start it was 1 or 2 groups signed up and now we have 8 or 9. Classes seem to be booked out at the moment, Mayobridge booked out in a matter of hours."

Cathal’s classes will be focusing on awareness and how to escape and protect yourself from an attacker, rather than fight an attacker. Cathal stated:

"My classes are going to be awareness and self-defence. When people think of defence they think, "oh we are taking someone to the ground," whereas this is more protecting yourself, not about attacking or beating your opponent.”

" We want to teach the women what to do if someone grabs you. They will learn how to release an opponent's grab, but simple grabs, it's not going to be something so complexed that an expert needs to know, it can be a neck grab, wrist grab, behind the back grab. They will need to know to be aware of their surroundings, you must know where the fire exit is in a public place, where the nearest adult is to help you in a situation where someone makes you feel uncomfortable.”

There has been a lot of controversy online and within the media where statements have been said circulating saying: 'Self-defence won't solve violence against women.'

I asked Cathal what he thought of this comment:

"It might not solve violence, but it will make people more aware what to do if they come face to face with an attacker.

"That’s not saying that if you do this or that move that you won’t be attacked again or if someone comes at you with a knife that you will be able to fend against it. You need to step back and if the attacker wants your phone, then give him your phone. It’s about safety and awareness.”

“For example, no one thinks they are going to be robbed, but unfortunately there is that 1%. If you bring the knowledge across to people, that 1% is going to have a chance of protecting themselves.”

Cathal does a lot of community work within NMDD and tries to give back as much as he can, when he can:

"I have done a lot of local community work over the last ten years and every so often I like to put my name out there to sort of give back what is needed in the area. Over lockdown, I delivered free fitness classes every Wednesday for nurses and doctors and NHS workers. This was sort of my way of giving back. I am very proud of being from the Newry, Mourne and south Armagh area. So, I think whatever knowledge I have and if there’s an opportunity to spread it that I would like to do so.”

" There seems to be first aid and child protection courses but there never seems to be basic self-defence. Self-defence is my background and I just want to use my knowledge to tackle different areas within society. For the last ten years I have been trying to take my work into different workplaces.

"Once, the 7th years in St. Paul’s High School had a free class each week so I took them for self-defence. I was hoping it would influence more of the students and perhaps train some of them up to be able to deliver these courses themselves. I think that every teacher, every doctor, every nurse needs some awareness. That is something I would be really interested in doing.”

"Teaching self-defence is much the same as teaching a young person first aid. It’s providing that person with the basic knowledge and skills that hopefully they will embrace and which can save a life. Most of all, self-defence can help build confidence.”

In the current climate, if these classes are going to help save a life then it really is time for the community to embrace self-defence.

For anymore information you can check out the Newry and South Armagh self-defence classes Facebook page at : https://www.facebook.com/groups/445009377370306/about