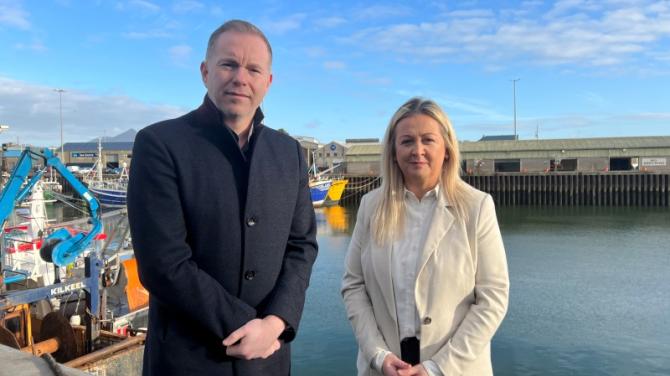 Sinn Féin’s Chris Hazzard MP has called on the British Government to replace vital EU Fisheries funds with an equivalent fund that can help future proof the Co Down Fishing Industry.

The South Down MP was speaking from Kilkeel Harbour, where he and party colleague Sinéad Ennis MLA met with local fishing representatives.

“The outlook for our local fishing industry is generally very positive, however there are a number of significant challenges ahead such as the growing need to conserve the marine environment, climate change targets and the ongoing requirement to modernise the local fleet and invest in our local port infrastructure.

“In recent times three Co Down harbours at Kilkeel, Ardglass, and Portavogie have come together to make the case for a targeted £98million support package in order to help meet these challenges. However despite early positive soundings, it is still unclear as to when and how this investment will be delivered by government.

“The lack of details and delivery timescales attached to the British Government ‘Fisheries Fund’ is disappointing, but not surprising. I hope government ministers will understand the need to move quickly and help meet the needs of our local fishing industry in Co Down.

“Before Brexit, EU fisheries funding would have been an obvious source of investment for the delivery of such a vision, so it is incumbent upon the British Fisheries Minister George Eustice, and the local minister Edwin Poots to identify and champion the urgency of alternative funding sources for our local industry.

“Despite the obvious constraints in access, both in water depth and overcrowding at quayside, Kilkeel harbour has witnessed the remarkable development of a maritime cluster containing more than 120 enterprises.

“With the appropriate investment and government support I have no doubt that Kilkeel can become an Irish Sea Marine Hub, ideally placed to support seafood and marine industrial services for many more years to come.”