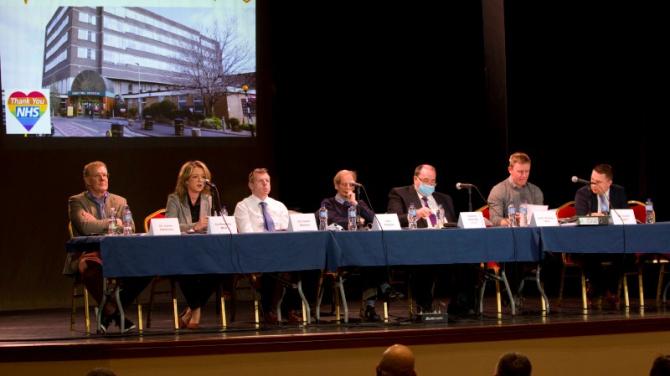 COLLECTIVE support from the people of Newry and Mourne along with backing from united electoral representatives and leaders in the community is the way forward to a bright future for Daisy Hill Hospital.

The Public meeting on Wednesday , organised by Newry and Mourne’s SDLP MLA Justin McNulty, followed the decision by the Southern Trust to remove emergency surgery services from Daisy Hill and locate at Craigavon Area Hospital.

This decision was taken due to the low number of surgical staff presently at the Newry site.

Chairman of the Down Community Health Committee, Eamonn McGrady believes that "constructive exchanges even when they have differences will bring about what is best for the Newry site and the local community. "

Local politicians, health officials and community leaders met in Newry Town Hall to voice their support in saving all services at Daisy Hill along with planning for the future.

It was a night of unity, where all representatives, despite their division in politics came together to stand up for the people of Newry.

The meeting also gave the people of Newry the platform to voice their views to the panel and attain some reassurance that they are going to work and do what they can to save the heart of this city.

Justin McNulty exclaimed a few words of appreciation after the meeting, stating: “ It is time for Newry City’s Hospital at Daisy Hill to be expanded to serve its natural hinterland of the border region of counties Armagh, Down, Louth, Monaghan, and Cavan. It is time for Newry City Hospital at Daisy Hill to become an exciting new hub hospital on the eastern seaboard of Ireland.”