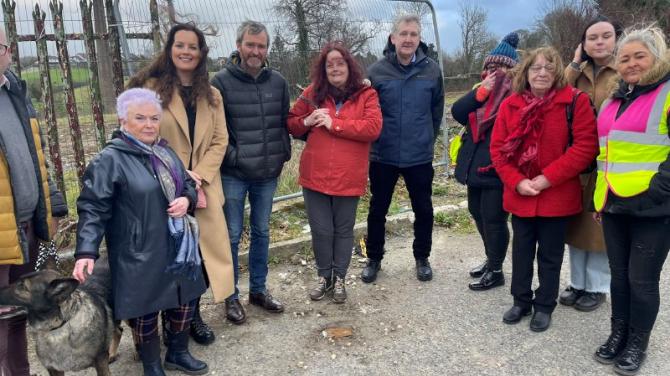 THE victims and survivor's organisation Birth mothers and their children for justice N.I have held a candlelight vigil outside the site of where the now demolished Marianvale mother and baby home in Newry as a tribute to all the young women and children that passed through the institution.

Speaking on the organisations twitter page BMATCFJ stated that the candles and flowers that were seen at the event and laid in place outside the front gates of where Marianvale was now stood were in place to “commemorate all the women/girls and their children that passed through Marianvale Newry and all the other Mother and Baby Institutions in NI. The building is gone but the memories remain.”

Present at the event was the Northern Ireland based Human Rights Lawyer Claire McKeegan of Phoenix Law Belfast who stated that the event in question was “a tribute to all those women and babies who passed through mother and baby homes in NI.”

“This event is a tribute to all those women and babies who passed through mother and baby homes in NI. One in five families are affected by these cruel institutions in NI but many still feel shame and stigma.

“That shame through the inquiry and independent panel report must be firmly handed to those who detained, abused and degraded innocent young girls. Those who adopted out their babies with forced consent.

“Many are coming forward even now and speaking out about these crimes that were committed. These survivors deserve truth and answers and demand that the recommendations of the Truth and recovery panel report are implemented without further delay.”

Since October 2021 The Police Service of Northern Ireland have launched an investigation into allegations of physical and sexual abuse involving Mother and Baby Homes and Magdalene Laundries on 6th October 2021.

Since then, officers in the dedicated Investigation Team have received 29 allegations of criminal activity.

The reports are from a number of people who were adopted from different named institutions and also from some who either worked there or were residents within these institutions.

All those who have come forward have been spoken to by a specialist detective from the Historic Child Abuse Unit within the Public Protection Branch and have been offered the opportunity to have their account recorded so that a criminal investigation can take place.

All those in contact are also offered to be signposted to other services for help and support.

Detectives are working with ‘Truth Recover NI’ and ‘Birth Mothers and their Children for Justice NI’ to encourage more victims and witnesses to come forward.

“A number of our members have made statements to the team reporting past criminality or to establish whether criminality occurred in relation to their experiences.

“Establishing potential criminality is imperative, either during individuals’ confinement in one or more of the many types of NI institutions or as babies, now adults, born from an institution in Northern Ireland and subsequently adopted through coercive methods, fostered or boarded out or sent to institutions specifically for children.

“Truth Recovery NI is actively encouraging Survivors to contact the Investigative Team. You will be able to share your experience with Detectives in a safe, understanding and supportive environment.”

“This is a safe and confidential place to come forward, get information and support“

Officers are pleased that people are having the confidence after all these years to come forward. However, they believe there are still people out there who have suffered and not yet reported to the Police, including those who may no longer live in Northern Ireland.

To reach people who have since moved, social media advertisements have been set up to geographically target Northern Irish expats living in Great Britain, USA, Canada, Australia and New Zealand. A dedicated webpage for the investigation is available here: Investigation into Mother and Baby Homes and Magdalene Laundries (psni.police.uk)

Detective Superintendent Gary Reid said: "We don’t want anyone to feel they have to suffer in silence anymore and we will continue to do all we can to reach as many people with this message as possible.

“If you were the victim of abuse in these Homes or know somebody who was, or if you witnessed criminal activity take place, please contact us.

"We care about what you have to say, will listen and support you, and will act to keep you and others safe."

A dedicated reporting system is in place to make it easier for people who suffered to come forward.

Anyone wishing to contact the dedicated Mother and Baby Homes and Magdalene Laundries Investigative Team can do so via the following options:

Outside of office hours you can call 101 to speak to a call handler from the Police Service of Northern Ireland who will pass on your details to the dedicated investigation team to make direct contact.

Officers will deal with any matters reported in a sensitive manner and will, where possible, progress matters through investigation.