'I thought I had reached the bottom, but then someone knocked from below" 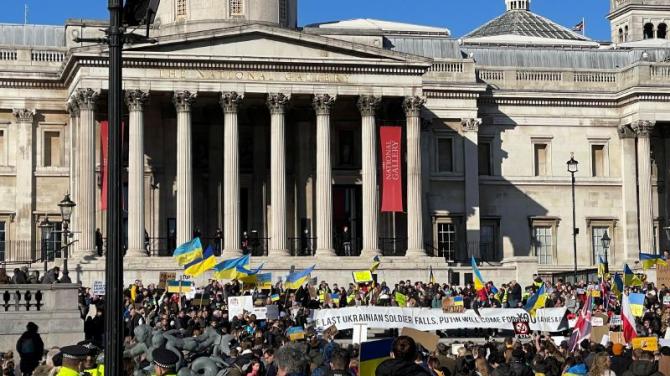 FOR Irina, the current crisis has brought back some horrible memories from the challenging events Russia faced in the 1990s with the collapse of the Soviet Union.

The economic chaos that followed led to Irina not having enough money to feed her young children.

"I had two small children at the time, and I remember there was one week that I was not able to give anything to my children and that was one of the hardest times of my life. Today is very similar."

"Food is extremely high priced now. I was working and trying to continue as much as I can, but I have not been able to get my money because of the war restrictions and bank sanctions and I will have no money to buy food. So now I try to use up my savings to buy what I can."

It is clear from speaking with Irina this is not a war for the people. If it was, then their leader would not be allowing its people to face such life-challenging circumstances.

The future of Russia is uncertain right now as Irina confessed heavy-heartedly, “We have no future anymore.”

“Here in Russia everyone is facing a huge test right now psychologically. People are completely distressed; we are worried about what is going to happen. Our children have no future and that is probably the hardest thing."

Just outside of Irina’s home she can hear the chants of peace protesters and like them she too wants peace.

"There are so many people here protesting and signing letters for peace, the government does not listen to us. We don't want this war for anyone, not just us, the Ukrainians especially. Ordinary people, they don't deserve what is happening."

Western news channels have shown protestors of the war being arrested and taken off the streets. Irina confirms that protesting the war is now seen as a criminal offence.

"Innocent peace protesters are being arrested for speaking up. People of all ages, elderly people, even small children. Also, anyone who is caught spreading "fake news" about the military will be sentenced to 15 years in prison. It is so, so scary.”

In Russia the Ukraine conflict is called a "military operation" an intervention by the Russian government supposedly to protect the people of Ukraine. She says many Russian citizens have been brainwashed by Russian President, Vladimir Putin and the Kremlin’s propaganda. But the majority of Russians don’t want a ‘military operation’, let alone war with its neighbour.

"Of course this is not for the people. They say so, but it’s not. There is a saying we have over here when situations go extremely wrong. It goes ‘I thought I had reached the bottom, but then someone knocked from below’. Meaning you think things cannot get any worse, but they always can."

The Russian Parliament passed a law on Friday, to make it a crime for any media organization to refer to what Russia’s military is doing in Ukraine as a 'war.'

It has been reported that any tv or radio stations not using the terminology 'military operation' to describe the conflict will be cancelled. Many independent news stations in Russia have now shut down as a result leaving government-owned news outlets to control the Kremlin’s version of events.

"We have this radio station called Echo of Moscow which is opposed to Putin. This station has been cancelled as the government accuses them of lying. This was due to them describing the situation as a war."

"It is like civil war in Russia now with the opposing views of the conflict. Some people can be very well-educated people, but we call them zombies because they have been brainwashed completely, and they would say the exact same about me for disagreeing with them."

"Television is ultimately the best form of propaganda. The news channels here are saying that this is a military operation to protect people in the regions of Donbass and Luhansk. They say this operation is to protect the people and bring freedom to Ukraine. They say the leaders of Ukraine are Nazis and we have to clear Ukraine from Nazism."

It was disturbing to hear how the citizens of Russia were being sold a totally different narrative on the conflict to what we here in the west are witnessing with our own eyes. But it is clear that the average Russian will be hit by the heavy sanctions now imposed on the country. And they are going to be faced with some challenging decisions in the future. I was curious to know if Irina felt safe in her country or if she planned to leave Russia.

"Nobody knows if we are safe or not. My daughter asked me today to leave as soon as possible and to go live with her in Spain. Some people I know would wish to emigrate, but I feel that you can't emigrate from yourself. Some people may think life can be better somewhere else, but it is not true.

"I probably will not leave Russia. I have my friends here and my son. Of course, I know many of them, including myself, are afraid and stressed, but what can I do? I can probably just help and support these people I care about and be here for them.

"I think it's so important to be there for my friends so that people from other countries will not see us as aggressive. It’s crazy, because none of this is our decision."

Lastly, Irina made a very moving statement that I know many Ukrainians and Russian citizens would agree on:

"If somebody said that if you give your life there will be no more war, I will honestly give my life. Truly, I would."