Genoa Cafe a lick above the rest 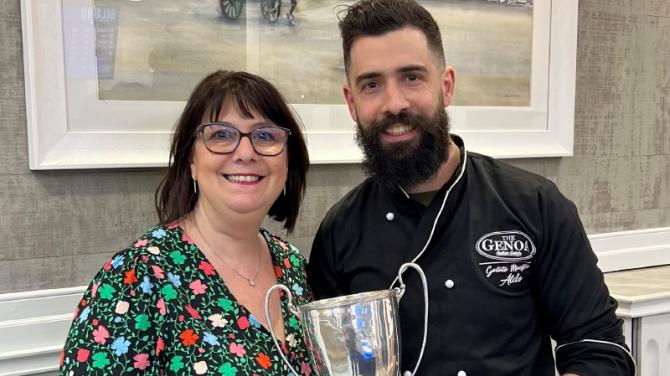 GENOA Cafe can consider itself a lick above the competition in Newry, Mourne and Down after having won a trophy alongside gold and silver medals at the prestigious National Ice Cream Championship 2022.

Genoa, which has outlets in both Newry and Warrenpoint, won a Gold medal in the contest for its own homebrand mint chocolate chip Gelato, as well as receiving a silver medal for their vanilla gelato in the same competition.

The Championships, which are ran by the Ice Cream Alliance UK, have been recognising the dedication and commitment made by ice cream connoisseurs such as Genoas own gelato Artisan Aldo O’Hare as well as company business director Gemma O’Hare in the creation of new delicious and irresistable flavours of Ice Cream for over seventy years now.

Gemma stated that as a family run business they are “overwhelmed and honoured” by the reciept of the award.

“As a proud Irish-Italian family, dedicated to producing the highest of quality gelato, we were overwhelmed and honoured to have been awarded as the 2022 Gold Medal winner for our ‘Mint Choc Chip”

“With the recognition of this prestigious award from the ICA, we would hope that this will increase the awareness of our history in the gelato industry and encourage new customers to explore our extensive range of flavours.”

The O’Hare’s are a fourth generation Irish-Italian family business that was established in the sea-side town of Warrenpoint in1910. They also trade in Newry and have recently opened a dedicated Gelato Parlour, ‘Ciao From Genoa’. Gemma states that the mint choclolate chip range of Ice cream that won them the coveted gold medal can trace it roots back to the family first having produced it in the l;ate 1980’s.

“We have been producing ‘Mint Choc Chip’ as part of our core gelato range introduced into the business from the late 80’s,” added Gemma. “I would like to pay tribute to the entire Genoa family of staff for their continued dedication to customer care. Without these wonderful individuals we would not be the business we are today.”

The National Ice Cream Competition is the ‘Oscars’ of the ice cream awards. It is held every year by the Ice Cream Alliance (ICA), the UK trade association for the ice cream industry. Hundreds of products are submitted across thirteen categories ranging from Best Vanilla to ‘Alternative’ category products which includes those free from the top 14 allergens, dairy-free, low-fat, high-protein, no-sugar, and others. Submissions are judged blind by ice cream experts – making the results the most prestigious in the country.

The National Ice Cream Competition has been running for 77 years and bestows a badge of quality and excellence on all those that win. It was judged by 43 experts over two days at the Ice Cream and Artisan Food Show 2022.

Zelica Carr, the CEO of the Ice Cream Association commended Gemma, Aldo and all the team at Geno Cafe Newry and Warrenpoint for their winning of a gold medal and trophy at the awards, stating that their receipt of the award demonstrates that despite the challenges the ice-cream sector has faced over the past two years due to the Coronavirus outbreak Genoa has “overcome these challenges and has bounced back better than ever for 2022 and the future.”

“Congratulations to Gemma and all her team at Genoa Cafe, the ice cream sector has had a challenging time over the last two years. This business shows that the sector has overcome these challenges and has bounced back better than ever for 2022 and the future.”