International Women's Day in the European Parliament in Strasbourg 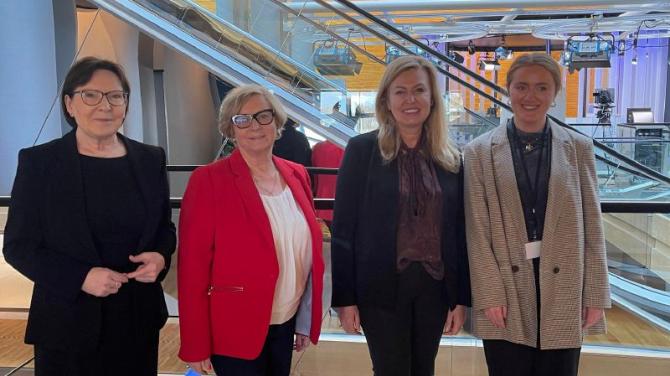 It was International Women’s Day in The European Parliament in Strasbourg and Female MEP'S from all over Europe were waving the flag for women.

Being a young woman myself, it was incredible to see such empowering, strongminded and motivated women having a voice in the monumental decisions in Parliament. However, with the horrific events occurring at the moment MEP’s paid tribute to the Ukrainian women who are fighting for their lives and presenting so much strength and resilience.

I had the pleasure of meeting and speaking with a few of them and sitting in on some conferences that took place in the parliament.

MEP Frances Fitzgerald has dedicated decades of her life striving to be a vocal advocate for women’s rights.

Frances is involved with many committees within parliament, such as Economic and Modernity Affairs, Women's Rights and Gender Equality, Development and Foreign Interference in all Democratic Processes in the European Union.

I was able to sit down with Frances in the MEP bar in Parliament and find out as a woman and strong spokesperson for feminism in Parliament, what the importance of International Women’s Day was to her:

"It’s about representation, and it’s about a critical mass of women, we have only 22% in the Irish parliament, this parliament is 39.1%. I think it’s about democracy, if you don't have women and minority groups and if you don't deal with the other diversity issues for example around race and disability, you just don't have a parliament that is as effective as it should be.

"We really must work, hard through quotas, through positive action, through the political parties, supporting women candidates and realising that it's not good enough to sit in a room with 90 men and two women or 50 men and one woman. I have been in cabinet when there was two women, three, four and five, and it does make a difference, it’s representation of citizens, it’s about our democracy and equality of it and better decision making.

"It’s a huge economic price as well for having women involved as well in boards and in business, and for dealing with equality the cost is enormous.

Fitzgerald made a speech in Strasbourg that day to discuss the horrors that women in Ukraine are facing this International Women’s Day. Fitzgerald stated:

“ The tragedy of this International Women’s Day is that thousands of women are running under a hail of bullets, avoiding missiles and their houses falling down around them. Just two short weeks ago these were women contributing to Ukraine, in business, in communities and in building up the countries democratic spirit and democracy. Now they run under sniper fire, yet Ukrainian women have others who know what it is like, even in the past year.

“Ask the women in Afghanistan denied their voice, their education, their lives once again, and the women in Ethiopia raped and brutalised, is it just another weapon of war? The women of Yemen, the women of Belarus this is just one year for women in some of the worst places to be a woman. Now imagine all the rest, even in the best of places to be a woman, we have unfinished democracies, unfinished gender equality agendas. “

Frances conveyed " This is a landmark and historic day in establishing a European wide approach to ending Gender Based Violence. As this Directive falls under the scope of Article 83(1) of the Treaty on the Functioning of the EU, it ensures that the offences laid out in this Directive will be a crime everywhere in the European Union, and punishable to the same standards.

“Today we are making a statement in saying that there will be no havens of impunity for offenders of violence against women in the European Union.”

Frances continued, “This Directive ensures that there can be no hiding place for perpetrators of domestic and gender-based violence in Europe. There will be no sanctuary anywhere for those who commit Gender Based Violence.”

The Directive will now go for consideration to the European Parliament and the Council of the EU, after which a final text will be discussed and approved by both institutions.