South Down MP extends solidarity to Ukraine at London demonstration 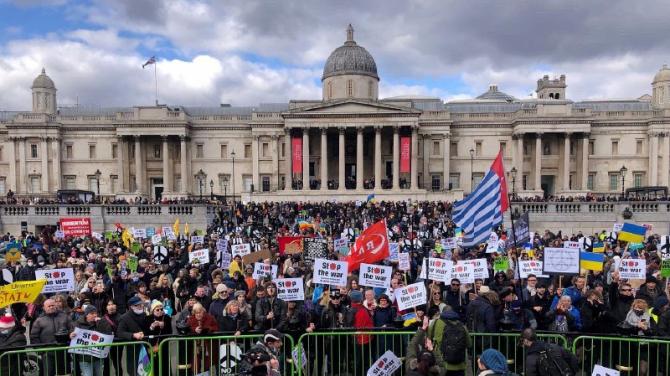 SINN Féin’s Chris Hazzard MP was a key note speaker in London’s Trafalgar Square on Sunday at one of the largest anti-war rallies in Europe at the weekend, as protestors mobilised in calling for peace in Ukraine.

Addressing the protestors, the South Down MP called for an immediate ceasefire and the withdrawal of Russian troops.

“We mobilise today in solidarity with the ordinary people of Ukraine, who are suffering the horrific impact of Russian military aggression.

"Anyone who has seen the pictures coming out of Ukraine cannot help but be deeply saddened and troubled. Families being loaded onto trains for refuge, mothers standing up to soldiers of occupation and young men taking up arms and hastily preparing themselves for the next wave of attack.

"I welcome the fact that the Dublin Government has lifted Visa requirements for Ukrainian refugees. Boris Johnson, and the British Government must do the same

"There should be zero restrictions on those refugees forced to leave Ukraine to come to these islands. And there should be no conditions applied. Safe refuge so that families can be reunited on humanitarian grounds – should be the shared goal of us all.

"Solidarity too with those protestors in Russia, and throughout the world, who stand for peace, and an end to war, death and destruction – to the displacement of people, and dislocation of family and community.

"A failure to deescalate this crisis will lead Europe once again to the brink of wholesale conflict, and will undoubtedly deliver more death; more destruction; and an even deeper humanitarian crisis.

"What is needed is a comprehensive, and sustainable ceasefire; the withdrawal of Russian troops, and a return to the negotiations table.

"I am part of a generation that grew up in a post-conflict society in Ireland; I too have only known Europe free from Cold War tensions. The thought of Europe sliding once again into the imperialist wars of the past is horrifying.

"A modern-day escalation in armed conflict, increased militarisation and the spectre of nuclear war should move all of us to say no to war, to work for peace.”