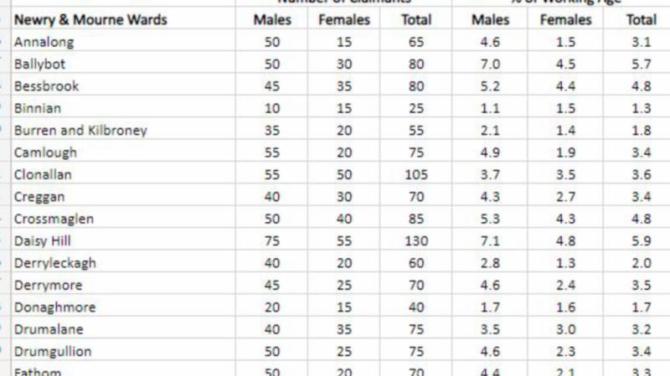 The Newry/Armagh Constituency recorded the highest rise in the number of claimants in the month of February.

The labour market statistics show that the number of claimants recorded locally in the month was 2,450.

This represents an increase of 90 on the previous month, January.

While the monthly totally increased, the figure year on year shows 1,270 fewer claimants.

The number of employees receiving pay through HMRC PAYE in NI in February 2022 was 777,300, an increase of 0.5% over the month and 5.4% over the year. This is the highest on record and the ninth consecutive month that employee numbers have been above pre-COVID levels.

Low number of confirmed redundancies since the beginning of 2022

NISRA, acting on behalf of the Department for the Economy, received confirmation that 40 redundancies occurred in February 2022. Over the year from 1st March 2021 to 28th February 2022, 2,070 redundancies were confirmed, 64% less than in the previous year.

Annual increases in employee jobs were seen within the services (11,790 jobs) and manufacturing (600 jobs) sectors. The construction and other industries sectors both experienced marginal decreases of 50 jobs over the year to December 2021.

The employment rate (proportion of people aged 16 to 64 in work) was unchanged over the quarter and increased by 0.3pps over the year to 70.4%. Neither the quarterly nor annual changes were statistically significant.

The total number of weekly hours worked in NI was estimated at 26.9million, a decrease of 3.2% on the previous quarter and an increase of 4.2% over the year.