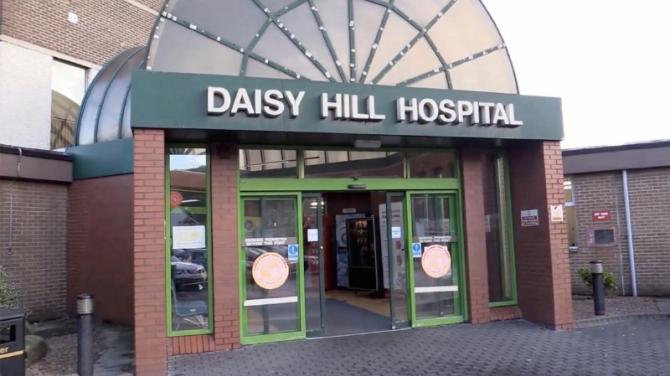 SDLP MLA Justin McNulty has hit out at the Department of Health and the Southern Trust for their ‘disgraceful neglect’ of Daisy Hill Hospital.

Mr. McNulty was speaking after he tabled a number of questions to the Health Minister in relation to emergency general surgery across the Southern Trust.

“For months now, I have been campaigning against the withdrawal of emergency general surgery at Daisy Hill. The Trust and the Health Minister have both greeted my efforts with hostility, saying that because of critical shortages in surgical staffing, what I am campaigning for is reckless and somehow dangerous.

“Emergency surgery was withdrawn from Daisy Hill because just one of six surgical posts were filled, yet Craigavon’s surgical roster is almost full. The Trust said they could not continue to provide a safe service with just 1 surgeon at Daisy Hill. That would be a reasonable point, if it wasn’t completely misleading.

“I asked the Health Minister how many general surgeons in the Southern Trust area are employed on single-site contracts and how many are employed across the Trust and free to move between hospitals. In his response, the Health Minister said, ‘no general surgeons at either the Daisy Hill Hospital site or the Craigavon Area Hospital site are employed on single-site contracts. All contracts are with the Southern Health and Social Care Trust and therefore the consultants may be required to work at any current or new site within the Trust.’

“If all emergency general surgeons in the Southern Trust can be required to work at either of the two hospital sites, why has the Southern Trust made the decision to let services collapse at Daisy Hill, rather than share consultants with Craigavon?

“We know that 4 consultant general surgeons were moved from Daisy Hill to Craigavon in the last 10 years. The Department of Health and the Trust need to wake up and realise that the road between Newry & Craigavon runs both ways.

“People in Newry, South Armagh, and south Down have a right to know why we are once again being treated a world apart – the last to get and the first to lose. We pay exactly the same money through tax and national insurance into the system as everyone else – we have an absolute right to expect equal access to healthcare.

“The Department of Health and the Trust are free to cook up whatever excuses or justifications they like. This is about equality in health care and we won’t be backing down.”

Responding to the comments, a spokesperson fort the Southern Trust said:

“In meetings with elected representatives over the past year, we have always very openly outlined our concerns about recruiting and retaining general consultant surgical posts across Northern Ireland and how in the Southern Trust this is a risk for our surgical service.

“The consolidation of emergency general surgery to Craigavon Area Hospital is a contingency plan, developed by our surgical team, along with clinical colleagues at both Daisy Hill and Craigavon hospitals, to address a very immediate and significant patient safety risk due to difficulties recruiting and retaining staff.

“Up until the end of February, Craigavon based consultants had been covering the emergency rota at Daisy Hill. With staffing now so stretched across both sites we cannot maintain a fully responsive emergency surgical service at both hospitals 24/7.

“A formal project is now underway, to develop proposals for public consultation on a longer-term best practice model to improve both emergency and elective general surgery across the Southern area. A refreshed recruitment strategy will be key to supporting any agreed new model and will be progressed alongside these proposals.

“Daisy Hill remains an essential part of the Southern Trust hospital network. We aim to maintain the acute status of the hospital through this process, whilst securing and enhancing its elective surgical capacity.

“We thank the public for their support and understanding as we try to make these improvements for your service.”