My trip to the European Parliament in Strasbourg : Part 2 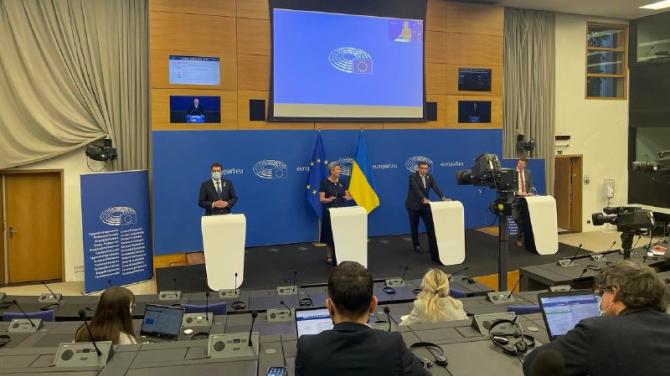 A press conference took place on Tuesday (8th March) in Parliament in Strasbourg to discuss the European solidarity with those fleeing the war in Ukraine.

The European Union has guaranteed that all refugees that are fleeing from the war in Ukraine will be enabled protection along with social welfare, education, and work rights.

" I want to speak of the Temporary Protective Directive that has been existing for more than 20 years but has never, ever been used because members of states have not been able to agree on that. “Now we managed last Thursday to decide to activate the Temporary Protective Directive for the first time ever in a unanimous decision in the council. I am so proud at how member states managed to get together and to make the decision when it was really necessary.”

It has been reported that two million refugees have already entered the European Union, more than one million to Poland, almost half a million to Romania and to Slovakia and Hungary.

Johanssen stated: "This is a moment to be proud to be European, where we see solidarity in practice."

"However, we must be aware that this two million in 12 days is the same number of refugees that the European union received during 2015 and 2016 together and more is to come, Putin will not stop."

Commissioner Johansson also wanted to make people aware of the fact there are criminals that try to use this situation. Unaccompanied children are at the danger of being victims of trafficking and the people within the European Union need to protect these children.

Commissioner Margaritis Schinas exclaimed, "We are not ready to step up to the plate and we are doing this today with a package we are presenting to you.

"All people who are fleeing war will be granted protection from and access to the EU health, education and labour residence regardless of their nationality, ethnicity or skin colour and we are today mobilising a significant number of financial steps to make this possible.

“This is a critical and very tangible expression of support. Together with my colleagues we travelled last week to all member states reception line, and we were impressed by the incredibly moving scenes with national officials, civil society and ordinary citizens being present at the border and train stations, coming to the aid of those arriving from Ukraine."

"Specifically, today on International Women's day I want to remind that it is primary women and children arriving alone and more often than not on foot, dropped off by husbands, fathers and brothers who drive them to the boarder and then drive back to fight against the Russian aggressors

"Despite the pressure, what we saw was an orderly process in place where everyone is welcomed, registered and given the assistance they merit and we will continue supporting this effort with a significant amount of money, as announced by the president at least 500,000,000 from the EU budget is being directed to deal with the humanitarian consequences.”

Commissioner Janez Lenarcic spoke of the dedicated assistance and endless resources that have been offered to the refugees by the European Parliament.

"We have been working around the clock since day one, since the 24th of February on providing assistance to Ukraine in the framework of European Union civil protection mechanism. Ranging from sheltered items, food, medicine, firefighting equipment, ambulances, power generators, water pumps and more. The total value of assistance already provided through the civil protection mechanism is well over 100,000,000. We have set up logistical hubs in Poland, in Romania, shortly also in Slovakia, we have police officers on the ground all in order to channel this unpresented flow of assistance to the country affected.

Commissioner Lenarcic went on to then assure that the European Parliament will continue with this assistance to Ukraine, to EU member states and other enabling countries as long as this illegal aggression on Ukraine continues.