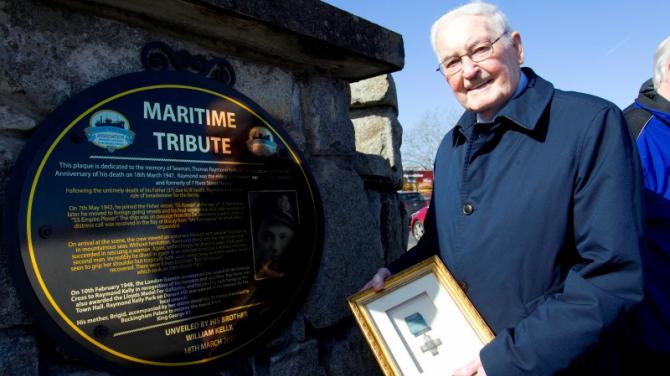 Raymond has been honoured for his selfless act of bravery after saving the lives of two drowning men and attempting to save the life of a woman. The plaque was unveiled by his brother William Kelly.

Raymond was born on the 19th March 1928 at 7 River Street, Newry. He was the eldeset in the family of three boys and three girls. After the death of Raymond‘s father Robert Kelly, Raymond took on the role as the breadwinner of the family.

Raymond had moved to foreign going vessels and his final voyage was as a crew member of "SS Empire Plover". Upon this voyage the passing from Rio De Janeiro to London when a distress call was recieved. The call was received in the Bay of Biscay from "MV Famagusta" to which they repsonded.

On the arrival of Raymond and his crew there was a lifeboat upturned and people floundering, in need of resuce in the reckless waves.

Raymond dived into the sea and was able to rescue two seamen. However, he dived in a third time and had attempted to save the life of a woman.

Raymond had been seen to have grasped her shoulder although tragically the pair were pulled under the recklesswaves, their bodies never to have been found.

Six lives were lost from "MV Famagusta which sank on the 18th March, 1947.

Although, because of Raymonds selflessness two lives had been saved.

On the 10th February 1948, the London Gazette announced the award of the George Cross to Raymond Kelly in recognition of his heroism and sacrifice. Raymond was also awarded the Lloyds Medal for Gallantry and his photograph hangs in the town Hall, raymond Kelly Park on Dorans Hill was named in his honour by the local council. His mother, Brigid, accompnaied by her eldest daughter, Rebecca, travelled to Buckingham Palace to receive the award from King George v1.

The plaque is on placed along the bridge wall on River Street. The memory of this inspiring man will live on for the people of Newry.