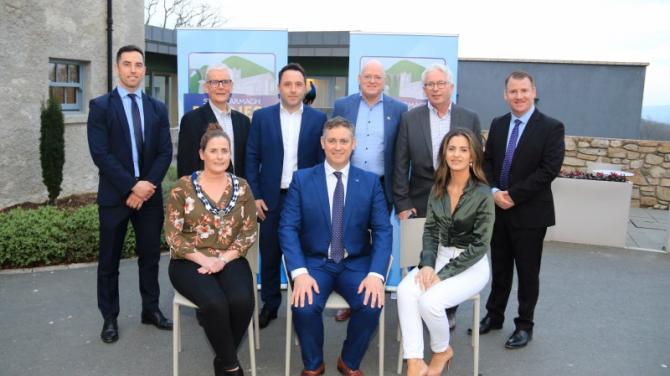 The newly established South Armagh Business Improvement group is set to improve the image and economic landscape of the area for many generations to come.

The group was established by local business leaders following a meeting in Killeavy Castle.

Chairman of South Armagh Business Improvement Group John Nealon outlined the groups principal objectives which is to "have more people working in, living in, shopping in, spending leisure time in, and visiting South Armagh."

Nealon stated how the group plans to significantly boost the local economy.

"Our mission is to connect businesses across the region to encourage collaboration; promote a positive image; and to represent the area with key stakeholders to deliver significant projects and investment.

"Through the development of the retail, leisure, hospitality, services and manufacturing sectors, we believe South Armagh will achieve sustainable economic development, growth, jobs and wealth in the short, medium and long term.” Nealon went on to relay the four projects that the group will implement in the future to achieve their mission:

"The second project is that we have identified 5 or 6 areas where street artand murals might be appropriate within the area to improve the built environment of those towns. The chairman referred to the parts of Ireland like Dundalk that have put themselves on the map with the completion of the country’s tallest mural.

He continued: We would want to work in partnership with the Newry and Mourne council to develop a branding for the area with welcome signs, it would freshen up the signs for entering into each of the local villages.

"The third is promoting more positive images and stories on social media in regards to the area and also of the good businesses that are in the area aswell and lift the narrative that would be more common of the south armagh area.

"The fourth is that we have worked with the Newry and Mourne enterprise agency and undertaken a feasibility. Our first step of this feasibility study is looking at a regional network of remote working facilities. This is regarding people working in Belfast or Dublin in the locality, and what facilities are there that could be used or leveraged to provide the likes of temporary office space. We are analysing that to see is there the need and is there the facilities existing in South Armagh"

Nealon was "overwhelmed" with the response from the attendees to the event, he stated:

"We were absolutely delighted and merely overwhelmed with the response that we have gotten, there was over 40 business people in attendance, and that is not even including the guests. We were absolutely thrilled. We held it in the most beautiful place, the Killeavy castle. We were also very fortunate to have Minister Conor Murphy and Tony McKeown (CEO of Newry Chamber) as guest speakers for the event.

One attendee was Councillor Peter Byrne who expressed the exciting prospects that the introduction of this group will bring to South Armagh:

“It was a brilliant launch event in terms of promoting businesses in South Armagh in a positive way. it was great to get the room full of businesses and local businesses as well and they are all eager to get involved and also get some benefit from it.

“At the start of these groups getting set up, there’s a lot of heavy lifting it needs the people to get involved and take on some of the workload because if this business improvement group can get up and get established and do the small things then it can lead to funding and point people in the right direction in how they can grow their business.”

The group have voiced that if there were any businesses in the following areas that would like to gain further insight into the group or wish to register their support they can send them a direct message on their Facebook page.

The organising committee would like to thank all those local businesses who attended the launch night and offered their support as well as local politicians Pete Byrne, Justin McNulty MLA, Aoife Finnegan and Oonagh Magennis.