"They Should have had this sorted out-" Donaghy criticises EA over lack of educational psychologists. 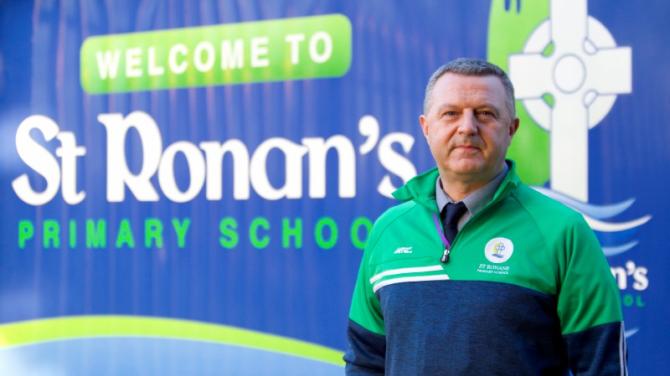 PRINCIPAL of Saint Ronan’s Primary school Kevin Donaghy has voiced his frustration in regards the announcement made by the EA stating that schools will receive fewer visits from specialist educational psychologists.

Making the announcement via a letter sent out to all schools the EA cited both “significant pressures” and a “sharp increase in demand” that has seen a 25% increase in the need for educational psychologists in schools as compared to four years ago as two main factors that have resulted in the decision to decrease the number of scheduled appointments with educational psychologists in schools throughout Northern Ireland.

However according to Kevin this is a problem that “they” (the Education Authority) should have sorted out” because “they know of the number of children that they have in the system.”

“We as a school recently received a letter from the EA to tell us about the shortage of available educational psychologists, they should have had this sorted out. The EA is the body that is tasked to provide this service but are they doing a good job at the minute?

“They have known the number of children who they have in the system. This is going to impact directly in schools because there are children that are sitting with difficulties that are not going to be seen to by an educational psychologist.

"The Education Authority have already imposed a limit on the number of children that can actually be screened in schools, this was introduced a number of years ago and now they are turning around and saying to schools that you cannot even have the number of slots that you have allocated because they just don't have the resources to fill them. It is ridiculous.”

Kevin cites the number of children in his school that may have conditions that impact upon their ability to learn, such as being on the Autism spectrum, as those who will feel the worst effects of this decision taken by the Education Authority drawing attention to the fact that with ASD “there already exists a huge waiting list of children waiting for diagnosis.”

"There are children in the school that are on the autism spectrum. The diagnosis of ASD is a medical condition and there already exists a huge waiting list of children waiting for diagnosis. So, we already have a delay in children receiving an ASD diagnosis by at least over a year if not longer. Then if the diagnosis of ASD is impacting on the children's learning, then you now have another huge delay because they are not going to get the support that they need in school to help them with their learning.

"Not every child who has ASD needs support because autism is a huge spectrum, but you do have some children with ASD that struggle and they need help from an educational psychologist. and these are the children who are not going to get the support that they need.”

While voicing his frustration at this announcement recently made by the Department, Kevin also drew attention to the level of funding that his school is currently receiving to support the students in his school as well as the ongoing cost of living crisis as two other challenges that his school is going to face in the future.

“Another problem is the level of funding. For example, for ourselves the engage funding is in place to support children in terms of recovery curriculum. The level of funding that I am receiving for 450 children is £2,500 pounds, however a nursery school with 56 children are getting £1,800. This is a huge discrepancy. You have people in the Department who are making decisions that are not qualified teachers and who have never led or managed a school.

“Also, I do believe that the cost-of-living increase is going to have a huge impact on schools because a lot more of our resources are going to have to go to help pay for higher utility bills. I have seen incidents whereby parents' association having previously been raising funds for additional equipment in schools, but are now raising funds for the essentials in schools.

"This is because the education budget was caught previously by over ten percent and we are operating at levels of funding that haven't really improved from around the period of 2008-09. In the last proposed budget, they had talked about cutting the education budget by a further 2 percent.

“You have to match rhetoric with action. If you have an N.I Executive that is saying that Education is a priority and that every child should be in school and that every child deserves high quality teaching and learning and this is your word and mantra, how do you reconcile this with the cutting of the level of funding going towards schools?”

Kevin concluded by asking the question of whether or not the mantra of placing education as a top priority for the Northern Ireland Executive is reflected in the actions taken by the government.

"Again, let me refer to the mantra of the various political parties in the Northern Ireland Executive saying that Education is a priority and that all children need to be in school for their health and wellbeing, but is this mantra being matched by the executives actions because they are not putting in the investment, they are not providing the services.”