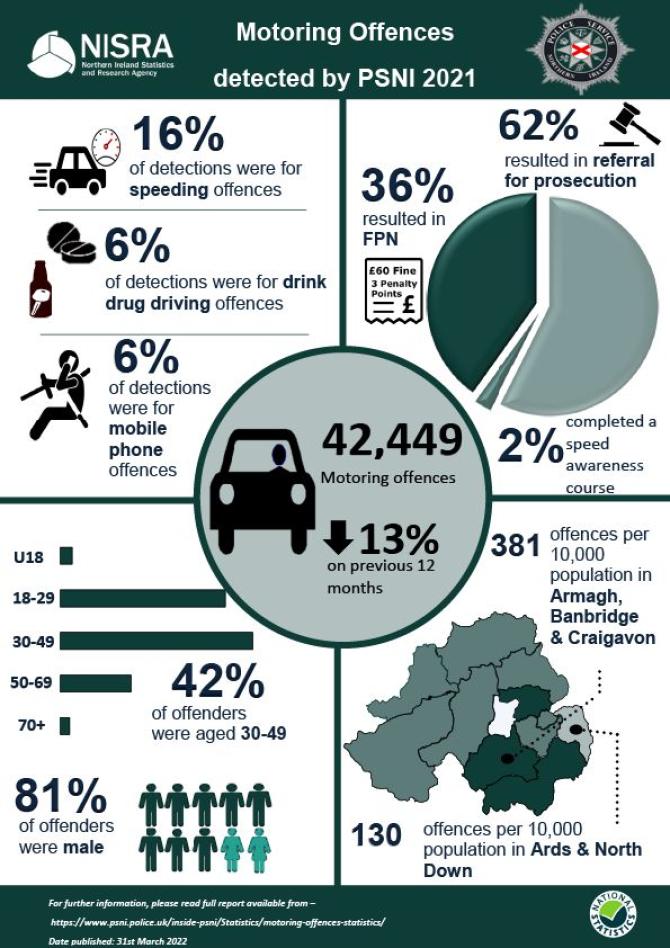 NEWRY, Mourne and Down Policing District recorded the third highest number of motoring offences in 2021, 4,903 in total.

Of these offences, 519 were for speeding; 290 for use of mobile phone; 441 for careless driving and 290 for drink/drug driving offences.

3,237 incidents were reported for Prosecution while people locally took part in the speed awareness course.

The report also reveals that Chancellor Road in Newry had the unwelcome distinction of recording the highest speed in a 30mph limit, motorist detected travelling at 90mph.

 Of the 42,449 detections in 2021, three fifths resulted in a referral for prosecution and almost one quarter in endorsable fixed penalty notices.

 Motoring offence detections have fallen by two-fifths over the last

Almost three quarters of the decrease in detections between

 Nonetheless, insurance offences was the largest group in 2021

with 6,905 detections, followed by speeding with 6,721 detections. There were a further 3,603 detections related to driving licence offences, 769 fewer offences than in 2020.

 Six offence groups showed modest increases in detections in 2021 including parking which was up by 253 (22%).

A large proportion of the decrease is due to the introduction of the Traffic Management (NI) Order 2005 which came into effect on 30th October 2006. This legislation decriminalised the vast majority of parking and waiting offences in Northern Ireland. Enforcement of parking/waiting restrictions is now the responsibility of traffic attendants employed by NSL Services Group (NSL) on behalf of the Department for Infrastructure (DfI).

 Three offence groups attributed for almost three-quarters of the 6,597 decrease in detections since 2020

 Nonetheless, insurance offences was the largest offence group in 2021 with 6,905 detections, accounting for 16% of all detections. Similarly, 16% of the total comprised of speeding offences, with 6,721 detected.

There were a further 3,603 detections related to driving licence offences, which was 8% of the total and 769 fewer offences than in 2020.

 Six offence groups showed modest increases in detections in 2021 including parking, which was up by 253 (22%).

 The highest speed recorded by PSNI officers in 2021 was 125mph on the M2 motorway, Antrim which is a 70mph stretch of road.

 In 2020 (the most recent year available), the NI Road Safety Partnership detected over 5 times more speeding offences than the PSNI (46,731), equating to 84% of the combined PSNI and NIRSP total for that year.

 Almost one quarter of all female detections was for speeding offences.

 One fifth of under 18 year olds were detected for insurance offences, while careless driving offences accounted for almost one quarter of offences detected among those aged 70 and over.

 Over three fifths of those detected for construction and use offences were aged under 30.

 Over half of those detected for mobile phone offences were age 30-49.