Rowan to scale new heights to raise funds for Aaron 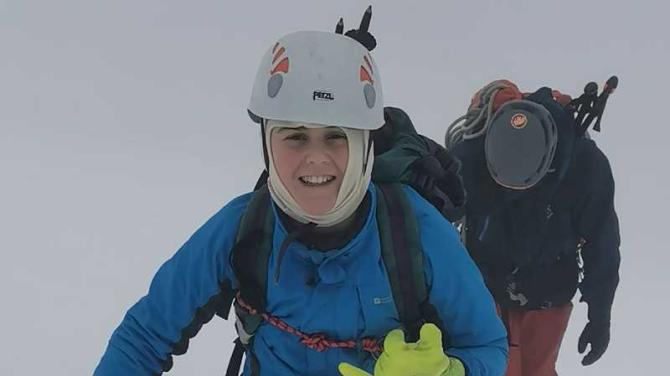 11-YEAR-old Rowan Bannon, son of the legendary mountaineer Terence “Banjo” Bannon, will be following in his father's footsteps as he attempts to ascend Mount Olympus to raise funds for Crossmaglen schoolboy Aaron Walsh,

Aaron suffers from cerebral palsy and diplegia (paralysis) in his limbs.

He is due to fly to America in the coming weeks for Life-changing surgery under the care of Dr Park, a world renowned surgeon in SDR (Selective Dorsal Rhizotomy) at St Louis Hospital in Missouri.

As Aaron embarks stateside, his friend Rowan will be hoping to the the reach the dizzy heights of Mount Olympus, one of the highest peaks in Europe.

“Both Aaron's father Patrick and Rowan's father Terence are firefighters so the connection between Aaron and Rowan was drawn here.

“Rowan along with his whole family are all mountaineers. His brother Conor climbed Mount Kilimanjaro to fundraise for the children's hospice in 2018. So I promised Rowan that whenever he turned 11, I would take him on a climbing adventure. This is how this came about.”

Terence ‘Banjo’ Bannon was the second person from Northern Ireland to reach the summit of Mount Everest in May 2003.

In 2006 he attempted to climb K2; however the attempt was aborted after the deaths of a number of the expedition members.

“I was taking Rowan to do the climb and I thought that it would be a nice way for him to fundraise for a local child.

“A lot of the big high mountains can be rather challenging but I think it is nice for children to have something to work towards, a goal.

“When he is up the mountain it will be good for Rowan to think about Aaron and who it is he is doing the climb for.”

Lauren was keen to highlight her son's dedication to a rigorous training regime that will, when the time comes, enable him to summit Mount Olympus. Lauren also states that it is thanks to the level of commitment shown on the part of Rowan that he is now “well prepared for the journey ahead.”

“Rowan has been training for this and is well prepared for the journey ahead. Rowan spends a lot of time in the mountains here. He also does a lot of technical climbing with his father which is great. Over his February school holidays he climbed Ben Nevis up the ice climbing route and he actually did about three ascents up this mountain during the course of that week.

“Ben Nevis is the highest mountain in the UK and is about 1,300 meters tall. Mount Olympus is around 3000 meters tall so as you can imagine Olympus will be a challenge for Rowan because it is almost twice the size of the highest mountain in the UK, but we definitely think he is up to the task. We are hoping that since he is doing the fundraising challenge for Aaron, this will spur him on.

“Like I said Mount Olympus is just slightly over 3000 meters so it is a big one. It will take us two days to reach the summit and we plan to sleep in a climber's refugee on the first day. It will be a big challenge for us. Having said that Mount Olympus is a beautiful mountain and I think it will be a really unique because it is an iconic mountain

“There is more than one summit on Mount Olympus but we are planning to hike to the highest point which is Mytikas. Fingers crossed with both the weather being well and everyone's health and wellbeing being well we will make the top.

“We are going to depart on the 27th of May and we are going to start the climb on the 30th with hopes of making the summit on the 31st. There are three other local women coming along with myself to help support Rowan in the climb and they are helping to fundraise for Aaron as well. They are Patricia McParland, Bernie McQuade, and Emma O'Brien.

“This is a great opportunity for a kid Rowans age. It is great for him to travel and see the world and to challenge himself. At age 11 to have done something like this is an amazing way to set Rowan up for his future.

“I hope Rowan can raise much needed funds for Aaron. While we haven't set a sum that we would like to raise we are just going to see how we get on and fingers crossed. At this point we are just very happy to receive any further contributions that will help Aarons family out and help him make his recovery.”

Rowan was also eager to relate his enthusiasm for the upcoming trip to Mount Olympus, stating that although he believes ascending the mountain will be in his opinion “quite the challenge, it will also be “good craic.”

“I can't wait to climb Mount Olympus, going up the mountain will be quite the challenge but it will be good craic.

“I don't think we will face any difficulties whenever we climb the mountain because we have been preparing for the climb.

“We have been going over Camlough mountain, Slieve Gullion as well as basically every mountain in the ring of Gullion. We have also climbed up Slieve Donard not so long ago.