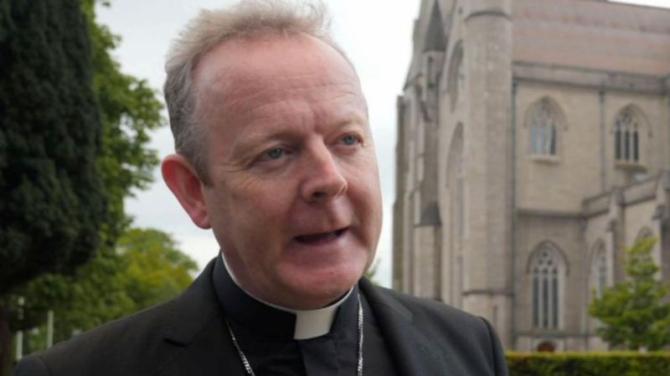 ARCHBISHOP Eamon Martin has appealed to those with information which can help resolve the cases of the ‘Disappeared’ to come forward.

Speaking at a Mass for the Disappeared, Archbishop Martin spoke of the continuing and the suffering of the families and the unresolved grief associated with our troubled past.

In his Homily, Archbishop Martin said:

‘There have been 19 known cases of individuals abducted, murdered and secretly buried during the Troubles, but in likelihood there are others.

‘Twice during Holy Week every year we read the story of the Passion of our Lord Jesus Christ. This Palm Sunday we listen to Saint Luke’s version, and later this week, on Good Friday, we will hear the Passion according to Saint John.

A striking feature of all the Gospel accounts is the way in which Jesus is shown as unjustly condemned: a sham trial, the ‘back and forth’ between Pilate, Herod, the Chief Priest and the baying mob; the verdict already determined, the sentence decided; accusations lined up, false witnesses coached; and, all the time, Jesus chooses to say little or nothing - fully aware that His fate has already been sealed.

It is a scene which is sadly rerun even today - anywhere where power and terror corrupts and the right to a fair trial is violated. One thinks of people across the world who are subject to unjust detention, smear campaigns and character assault simply for speaking out, or for being involved in peaceful protest; those who are deemed a threat by powerful governments or dictators; those who seek only to expose corruption, exercise their rights or protect their freedoms and who face trumped up charges, false imprisonment, torture or even death.

This annual Mass for the ‘disappeared’ reminds us of the lifelong pain and impact of unfair trials, secret condemnation, summary executions and concealed truth. So far there have been 19 known cases of individuals abducted, murdered and secretly buried during the Troubles, but in likelihood there are others. Their families have faced not only the trauma of sudden loss but also the added agony of not knowing where their loved ones are buried and why, and how they were taken.

Thankfully, through the work of the Independent Commission and many others, the bodies of fourteen of those who had been ‘disappeared’ have been recovered. I welcome the Commission members who are with us today, or joining us online.

The shocking scenes from Ukraine in recent days of defenceless people being murdered with their hands tied behind their backs, their bodies left unidentified in mass graves, bring home to us how cruel our world can be when conflict, murder, revenge and terror corrupts the soul and forgets love.

But this quiet annual gathering here at Saint Patrick’s Cathedral in Armagh, has also brought out so much empathy and solidarity (and it’s comforting for us to be able to gather more easily in person again this year) - families and friends who never previously knew each other, from different cultures, backgrounds and sometimes from opposite sides of our so-called ‘divide’, all united by compassion and by the shared experience of loss, unanswered questions and unresolved pain. And that solidarity has been such that hope has not been allowed to die - unjust trial and evil are not permitted to have the last word.

We remember those family members who have in the past gathered with us in support, but who have gone to their rest during the past year - Archie, Helen, Bell, John, Patsy and Peter and Rachel,

My dear families of the Disappeared, you know the awful strain of searching again and again for the place your loved ones were abandoned. You know how important it is for anyone who has even the slightest information about what happened to your loved ones, way back then, to come forward and share those missing details of what they knew, or what they did. So today, on your behalf, I appeal again to the conscience of anyone who can help with the cases of Lisa Dorrian, Joe Lynskey (who still hasn’t been found after 50 years), Seamus Maguire, Columba McVeigh and Robert Nairac to bring forward even the slightest clues, so that the agonising wait of you, their families and support persons, can be shortened, and those who remain hidden can at last have a Christian burial.

Paddy, I thank you for being here today and for the first time to bring forward a candle of hope in memory of your brother, Seamus Maguire, whose name has recently been added to the list of the ‘Disappeared’. We know that are other families of course, whose loved ones were never included in the list of the Disappeared, and who remain anguished and tormented by uncertainty about what happened.

The legacy of suffering and unresolved grief associated with our troubled past remains unfinished business, and a stumbling block to lasting peace here. There is still so much to be done to uncover the truth so that the full stories of what happened during the Troubles can be told; that the dead can rest peacefully in their graves; that the bereaved and injured can find justice and healing; that those who did wrong can make atonement, and, that a just and lasting foundation can be put in place for honest and shared future for us all on this island.

Reading today Saint Luke’s story of the Passion of our Lord, Jesus Christ, I am struck by the example of forgiveness and mercy shown by our Saviour, who even in the midst of His blinding pain and torturous death could pray, ‘Father, forgive them for they know not what they do’.

May His example of mercy inspire all of us, here and across the world, never to allow the evil of unjust trial and summary execution to have the last word..