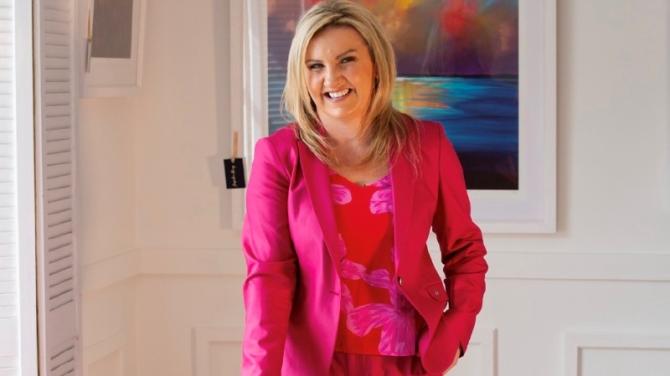 Jaqueline has had a passion for painting from as early as she can remember. Her fondest childhood memories were spent sitting and painting for as early in her granny’s at the foot of the Mountains of Mourne with views of the sea. However, when she went to school, she was encouraged to aim for a job that was going to guarantee her a stable career.

After graduating in 2000 with a B.Ed (hons) in Art & Design Jacqueline became the head of the art department at St Joseph’s High School, Crossmaglen for 12 years. Although, she loved teaching it just did not match the fulfilment that she gained from painting. Jacqueline left her position in 2017 following a conversation with her husband where they agreed that life is too short and that she should follow her dream of becoming an artist.

It did not take long for her dreams to become a reality as Jacqueline has since opened her own gallery in Rostrevor, showcasing her unique, vibrantly coloured work. However, the success did not stop there. Back in March 2020 Jacqueline received a message from none other than her idol, Jay Blades.

“Jay had just discovered my art on Instagram and said he needed me ring him straight away. I will never forget it. He rang me at 7:00 in the morning and we were on the phone for over an hour discussing my work. He said it made the hair stand up on the back of his neck and said we needed to do something together.”

“Jay finds old furniture and his work is about restoring and giving the items a new lease of life. He asked me to send one of my pieces to him and make sure it's bright and colourful. He said he wanted to share it behind several of his designs on his social media as he believed they would compliment each other.”

“I used lots of vibrant colour in it, like pink is the colour of positivity. I called the painting ‘Courage’ because to me it was the courage to follow your dreams and even at this age- I am in my 40's now, life is too short, and you just must go with it.”

After Jay had posted her work her business “went nuts.” The business overnight trebled, orders were coming in thick and fast from England and all over the UK and beyond.

It did not stop there, Jay being such an admirer of Jacqueline’s work reached out again to Jacqueline to suggest a collaboration with her.

Jacqueline stated: “Jay rang me and said "look Jackie we need to do something collaborative together here. I can see your art in velvet on my furniture, we need to do this.”

Jay then commissioned Jacqueline to create a vibrant painting called ‘Into the light.’

“He said he wanted me to do a seascape, but he wanted a light coming up from the right-hand side of it, almost like a symbol of hope. He then scanned it and got it put onto luxury velvet fabric and created furniture and cushions from that and they sold out straight away. So, he rang me and said you need to launch your own collection of luxury homeware because it is just perfect, their just meant to happen.”

Being an admirer of Jays work for many years, to Jacqueline this must have been so surreal:

“I followed Jay for years and I remember saying to my sister that I am going to meet him one day and she just laughed at me. I have followed his work for so long, he has been a real idol of mine. He is so down to earth and so modest. I remember he even said to me when I was gushing on the phone, “Jackie I am just a normal man who loves your work.”

Although Jays furniture is available for people to purchase online, he does not have a gallery located in Ireland to showcase his work. However, Jay insisted that he would be “honoured” if Jacqueline showcased and sold his work in her gallery:

“Jay contacted me a couple of months back there and said he would be honoured if I would sell his furniture in my gallery. He said he felt it was the next part of the chapter of the story. He believes our art and designs are just meant to be together. We now have his collection which is the first in all of Ireland, North and South.”

Although Jay is booked up with a busy filming schedule for the next couple of months Jacqueline informed me that he will be making a visit once he is free to engage in a possible ‘meet and greet’ with the locals in Rostrevor.

With huge success so early on in her career, I was curious to find out if Jacqueline had any regrets about not following her dreams earlier in life:

“At time I think I should have done this 20 years ago, but I don't think I would have been as courageous and as grateful. Every day I literally feel so grateful for this and what I am doing. I was in a job that I genuinely did love but it wasn't my calling, it wasn't my vocation. I think it happened at the right time and also when I had my boys, I feel like I am inspiring them along the way. I feel at this stage in my life I have so much to prove to them as well. I think everything happens for a reason. I am just pouring every minute into it and my time and passion into it.

Just speaking with Jacqueline you really do feel the positivity radiating from her as she speaks about her work. I wanted to find out did she have any setbacks along the way:

“No setbacks, my husband would say I am real optimist, and he is a realist. He would have said we need to be careful, there are risks about doing this in terms of financially. My granny passed away two years ago, and I could just hear her voice in my head, and she pretty much was championing me for being an artist and I could hear her voice in my head saying don't worry about anything, you were born to be an artist.”

With nowhere to go but up, how does Jacqueline balance being a wife to her husband Scott and a mum to two growing little boys – Finn and Evan- and running a successful business?

“Yes, that’s a challenge in itself, but it’s also one of the reasons that sparked me to do this, being mother later in life. I want to be a mother as well; I want to have time with my children. It’s about work/life balance. I would say that it is a challenge but when they go to bed I’m painting and when they go to school I am painting. I work around what work best for the family.”

Jacqueline will be unveiling the pieces at her gallery on Friday at 1:00 to showcase Jay’s work for all of the public. With the success that Jacqueline has had so far, it is clear if you have a dream, you must follow it.

“You need to put every ounce of passion, drive, and positivity into it. If you really believe it’s going to work for you, it will. I genuinely do feel that strongly. It’s never too late. I am 44 and happier than I have ever been and living my dream life.”