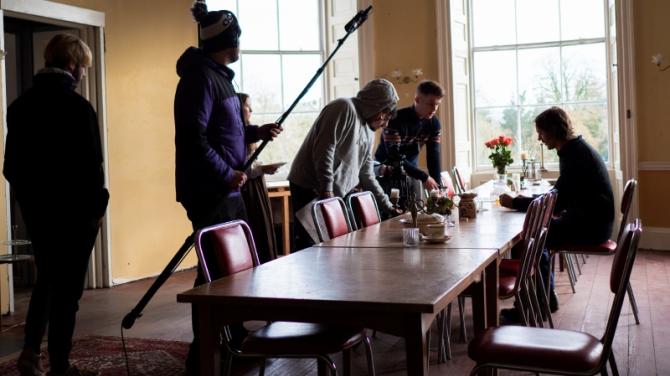 John Farrelly, a 21-year-old award-winning Irish filmmaker from Warrenpoint is set to release what will arguably be the first Irish Language Horror feature film ever made.

The film is called ‘An Taibhse’(The Ghost.), an Irish Language psychological horror based during the tail end of the great famine. The set up sees Éamon and his daughter Máire, hired as caretakers to look after an isolated Georgian Mansion, over the winter of 1852. John isn’t giving too much of the plot away, but with the film being in the horror genre, we can expect there to be many eerie and ghostly twists and turns as the story unfolds.

With filming complete, John and his crew are currently in the post-production process and aim to release the film this year. I spoke with John on this exciting venture and asked what made him go down the route of making the film in the Irish language film.

“You are exposed to a more natural form of the language with authentic vocabulary and slang. Foreign language films allow you to visit any country and place in time from your home. With a combination of language, production design, and costume, they allow you to experience new landscapes, art, architecture, foods, fashion, and culture.”

John began writing the film over the summer of 2021. Production then began in November and filming took place in County Wicklow in Coolattin House, reportedly the biggest house in Ireland. After multiple reshoots, John and the team completed production in early March.

The two lead roles in the film, Éamon and his daughter Máire, are played by the Irish actors Tom Kerrisk (Éamon) and Livvy Hill (Máire). However, this is not the first time John has worked with the talented pair :

"I previously collaborated with Tom and Livy on several films including a Star Wars short film ‘The Lost Jedi’. The entire cast and crew are the hardest working and talented people out there and it was a pleasure to work with them on this. I couldn’t have done it without them.”

John has a huge interest in horror films and believes there are far more underlying social factors hidden beneath these films. He believes filmmakers use characters such as monsters and witches to “tackle issues that are present in the world.”

John exclaimed: "I love the horror genre. Especially contemporary horror films like The Witch, Hereditary and Get Out. These films are horror films on the surface but have a deeper meaning behind them. They tackle issues that are present in the world today by using fictitious monsters to make sense of it. Like vampires being a metaphor for the rich upper class sucking the life of the poor. I wanted to use the dead to make sense of real-world horrors. "

John has always had a passion and dedication for creating films. Although he still believes he has a lot of work to do before he gets his big break:

“I’ve always had a passion and love for film. Since I was a child, I’ve been making short films and animations. I’m in a fortunate position now where I am making films that I want to make. I’m going to keep working on as many films as I can and maybe one day I’ll get the big break.”

John aims is to acquire distribution for the feature film and hopefully enter it into film festivals.

Keep your eyes peeled on John’s social media to find out the release date for ‘An Taibhse’ as it definitely will be one horror movie not to miss!