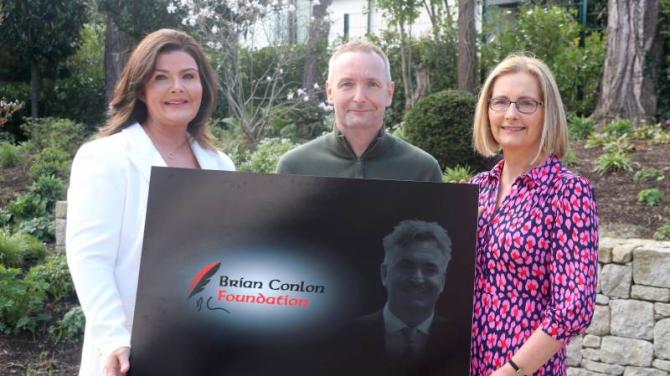 A Newry family has launched a new Foundation to celebrate the contribution, life and legacy of Brian Conlon, founder, and former CEO of First Derivatives.

The Brian Conlon Foundation is built on the core areas Brian was passionate about, including advancement of education, boosting amateur sport, supporting causes in his hometown of Newry and donating to charities close to his heart. The Foundation will be overseen by Trustees, Julie Conlon, Brian’s wife, sister Kathy Kearns and brother Ciaran Conlon, who will be supported by Brian's wide network of family, friends, and colleagues.

Launching the Foundation, Ciaran Conlon said: “We are proud to launch the Brian Conlon Foundation, to acknowledge and celebrate the life and incredible impact that Brian had on the worlds of business, education, sport and his local community.

“He may have been known as a giant in business with the success and growth of First Derivatives (FD), but he also loved sport and especially Down GAA. Brian was a talented footballer and a cornerstone of the Down team in the late 80’s, before a serious injury cut his career short. He often said he would have swapped all his success at FD for an All Ireland with Down in the 90’s.

“Brian excelled at many sports and understood the need to support them at grassroots level. This is why sport forms a key pillar within our Foundation, to support individuals via scholarships and provide funding for amateur sporting organisations.”

First Derivatives employs over 2,500 across 15 offices around the world, a business empire Brian built from scratch out of his family home in Newry. Ciaran continued:

“No matter the temptation to relocate the headquarters to a main metro centre, that was never on Brian’s agenda. He was immensely proud that from our offices on Canal Street, we were supporting trading systems for major financial institutions from Tokyo to New York, to Sydney. He put Newry on the global map.

“He never forgot his roots. Brian was Newry through and through, and therefore his hometown lies in the heart of this Foundation. We feel it is a fitting tribute to Brian, who cared deeply and was committed to supporting the place he called home to try to give something back to that community.”

Brian was diagnosed with Oesophageal Cancer in 2019, and the Foundation will support work already being done by Queen’s University in early detection of the disease. Details of this remarkable project are due to be announced in the coming weeks.

Kathy Kearns. Brian’s sister and fellow trustee added, “We are honoured to set up a Foundation which will have a major impact and ensure Brian’s legacy lives on.

As many people know, Brian was diagnosed with Oesophageal Cancer in 2019. Oesophageal cancer has seen a huge increase in the past 20 years and the majority of people who have it are asymptomatic and by the time of diagnosis the chances of survival are greatly diminished. The

obvious key to combating it is early detection and despite the growth of Oesophageal cancer, it only receives a small portion of all cancer funding in the UK.

Therefore, the Foundation is very excited to be given the opportunity to work with The Patrick G Johnston Centre for Cancer Research at Queen’s to provide additional funding to their cancer research teams and support the work already done there in the hope we can enhance early detection of Oesophageal Cancer. Details of this remarkable project are due to be announced in the coming weeks.

Ciaran has already mentioned some of the pillars of the Foundation, but Brian was also a great advocate of education. We hope that through the Foundation’s various educational initiatives, we will continue to provide opportunities for young people to pursue their ambitions no matter what their background, just as Brian did through First Derivatives.”

Julie Conlon, Brian’s wife concluded: “We launched this foundation to honour Brian’s memory. We remember Brian as a loving, caring and supportive husband and father, but our children never got the opportunity to witness how many lives he touched outside our family home. We want them to always know the kind of person their dad was. He had a brilliant innovative mind, generous spirit and ability to solve problems and make a tangible difference. Hopefully, through the work of this foundation we can involve the children in creating a living, lasting legacy. Something that would make Brian proud.”

The Foundation will donate either directly to its causes or via its partners, Community Foundation (NI) and Queen’s University, Belfast.

For more information on the work of the Brian Conlon Foundation and the and the work they are doing with their partners, visit www.brianconlonfoundation.com or follow on Facebook and Instagram.