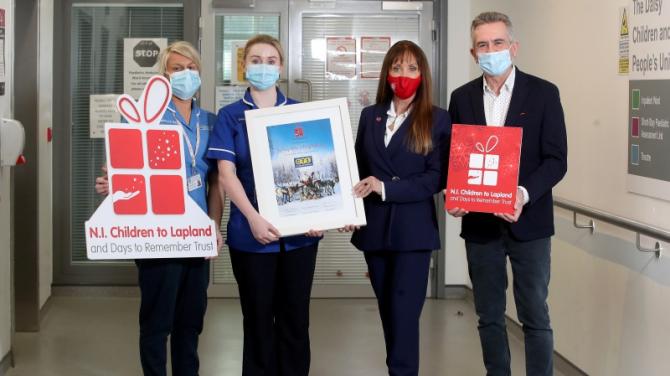 A drive to deliver much-needed sensory toys and equipment to paediatric units across the province has been deemed a success by NI charity, the Northern Ireland Children to Lapland Trust (NICLT).

The scheme included eight paediatric units and the Northern Ireland Children’s Hospice, and was created by NICLT Trustee Dr Mark Rollins to support children living with life-threatening and life-limiting conditions and who spend a lot of their precious time in hospital and/or hospice settings.

The idea came about as a result of the pandemic, which prevented the charity from carrying out its traditional annual flight to Lapland, which has been creating memories for children with challenging conditions for the past 12 years.

A number of leading Northern Ireland businesses are corporate partners of the Northern Ireland Children to Lapland Trust. Their ongoing financial support allowed the charity to present approximately £1,000 worth of sensory toys and equipment to their respective paediatric units.

“This is a unique charity drive that allowed paediatric units around Northern Ireland to benefit from the most suitable sensory toys and equipment for their respective environments.

“These gifts will make a difference to children, carers and health teams who know full well the challenges they face daily.

“We are truly grateful for the very generous donations from the charity’s corporate partners in this scheme. They are among some of NI’s most esteemed companies and some of them have experienced one of their most trying times in business during the pandemic, but they haven’t allowed that to get in the way of their generosity.”

Speaking about the impact the inaugural gift delivery had on children in the hospital, Jodie Kenny, Lead Nurse at Daisy Children and Young People’s Unit, Daisy Hill Hospital, Newry said:

“Being in hospital can understandably be a stressful experience for children and their families and we always want to do everything we can to put them at ease during their stay with us. Huge thanks to the Northern Ireland Children to Lapland and Days to Remember Trust and all its partners for their very generous donation of sensory toys, which are a very welcome distraction for our young patients.”

The charity’s annual Lapland trip with 100 local children with life threatening or life limiting conditions had to be cancelled because of the covid pandemic.

Instead, the charity raised funds to give 110 local children, who were nominated by the eight paediatric departments and the NI Children’s Hospice, a new experience, including a detailed personal letter from Santa, a video from the man himself from his grotto in Lapland, a visit from Santa and his elves as well as a gift to the value of £200, all received in the safety of their own homes.

If you would like to find out more about The Northern Ireland Children to Lapland Trust or to make a donation check out www.niclt.org