100th anniversary of the handover of Aiken Military Barracks 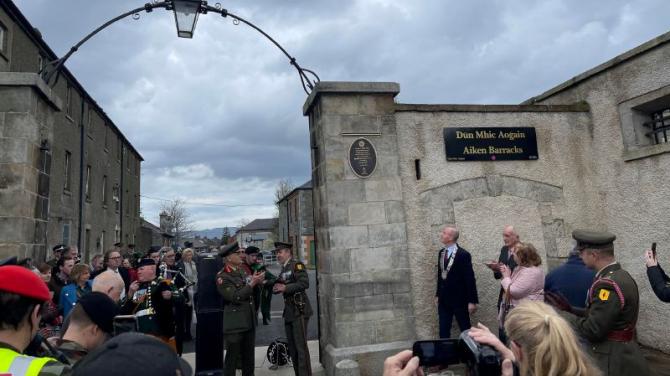 Wednesday the 13th of April marked the centenary of the handover by the British of the Aiken Dundalk Military Barracks.

The ceremony was to commemorate the troops of the Fourth Northern Division, under the command of Camlough born Commandant General Frank Aiken, who took the surrender of Dundalk Military Barracks on behalf of General Headquarters of the Free State Army one hundred years ago at 1400Hrs on 13th April 1922.

The handovers of the military barracks in 1922 are a key moment in Irish history not just for the Defence Forces, but for the political and social history of the Irish people and their State. The departure of the British Garrison - then the very expression of the British Empire’s hard power in Ireland- represented the end of colonial rule after some seven centuries. The raising of the National Flag in what had been the centres of imperial power in Ireland was a very powerful symbol and one that resonated with Irish people at the time.

It was reported that crowds of people had gathered on that morning outside the Barrack gates to witness a formal handover. Trucks exited the barracks laden with stores, cloths, ordinance, and some with a union flag flying from the rear. Some trucks were also carrying out heavily armed British soldiers, this was for the very last time in history. 217 soldiers of the Royal Field Artillery were stationed at the Barracks before this, along with members of the Royal Irish Constabulary, who were awaiting disbandment.

However, the crowds were disappointed as General McKeon and his men did not appear. Instead, local men of the Fourth Northern Division, who's Area of Operations consisted of North Co. Louth, South Co. Down and South Armagh marched in an alternative gate into the Barracks. This was a much more formal and quieter handover that was not anticipated.

It was an emotional day for many, remembering the courageous men that had given their lives to their country. It was also a day of celebration, the impact that the actions of these men had on the history of Ireland.

Family members of the officers and troops of the Fourth Northern Division were present at the event. This included Frank Aiken jnr, son of Commandant General Frank Aiken who offered some heartfelt words in honour of his father and the men within the 4th Division.

Frank Aiken Senior was born on 13th February 1898 at Carrickbracken, Camlough, County Armagh, the seventh and youngest child of James Aiken, a builder from County Tyrone, and Mary McGeeney of Corromannon, Beleek, County Armagh. Frank Aiken was educated at the Camlough National School and in Newry by Irish Christian Brothers at Abbey Christian Brothers Grammar School.

Frank Jr stated: “100 years ago a 23-year-old farmer, called Frank Aiken from Camlough accepted on the order of Michael Collins and on behalf of the Irish Free State, the ownership of this barracks which had been built in the 1790’s.

"To come from a burned-out farmhouse in Armagh and a Fourth Northern Division HQ in Mullaghbawn to live in a former barracks of the British Army in Louth was in any language a journey for a young soldier of conviction from the Island of Ireland.

Aiken, an Anti-Treaty supporter, was arrested by the pro-Treaty military and imprisoned in in Dundalk Gaol along with his men. He would later escape in a mass break out of over 100 men in July of that year.

Frank Jnr. recalls: “When arrested in the Barracks he commanded he was mighty unhappy, but so well supported by his comrades of the 4th Northern that they helped him out of prison and in a well-planned move retook the Barracks a few weeks later. Irishmen died in that action – a fact that saddened him – I repeat his words to my boyhood question about his fellow Irishmen being killed. He said, “dreadful things happen in war and worse in Civil war.”

Frank Aiken Jr also wanted to pay tribute to the National Army through its officers of the day, along with the Aiken family and Dundalk Barracks:

“It is a proud day for us to remember my father and our close relative who served the Northern County so well.”

A commemorative plaque was also unveiled which stated, " On the 13th of April 1922 Commandant General Frank Aiken and the Fourth Division, took control of this Barracks from British Forces, on behalf of G.H.Q Dublin." This permanent memorial is afixed to the outside entrance of the Barracks for the people of Dundalk and a far to visit and pay their respects.

I spoke to the son of Adjutant of 4th Northern Division John McCoy of Mullaghbawn, Art McCoy. John was second in command to Frank Aiken. He was the courageous man that led a small unit that breached the Dundalk Gaol wall with dynamite, and in fifteen minutes captured the garrison of 300 men and arms for 400.

“This day does make me quite emotional, “ said Art. “My father was a good, good man. He had endured the war of independence and he organised the hole in the wall of the Dundalk prison where the 108 prisoners escaped. He never spoke of the war, none of the people of that era did, but he was a remarkable man. All the people who were part of the 4th Division were remarkable people,” commented Art.

John McCoy was later captured in an engagement on the Castleblayney road. After the Civil War he moved to Dublin to work with the Military Pensions Board.

Mr McCoy also informed me that one of the escapees of the incident was the father of former Ceann Comhairle of Dáil Éireann, Dr Rory O’Hanlon who is pictured above with Frank Aiken Jnr.

Frank Jnr’s final thoughts on his father were filled with obvious emotion and pride: “I can never forget the hatred my father had for the civil war. Every time I speak about it I crack up. I got that from him. He was a remarkable man in the army and even when they left here, they didn’t wreck the barracks before they walked out. He took it over for the free state and hoped that the civil war would finish more honourably.”

For many in Dundalk this momentous occasion was an emotional day as they remembered friends and loved ones who were no longer with them. People from all walks of life were brought together, to remember and pay tribute to the selfless acts of bravery these men carried out and to the legacy that they have left behind.

Head over to the Newry Democrat website to watch highlights of the ceremony: