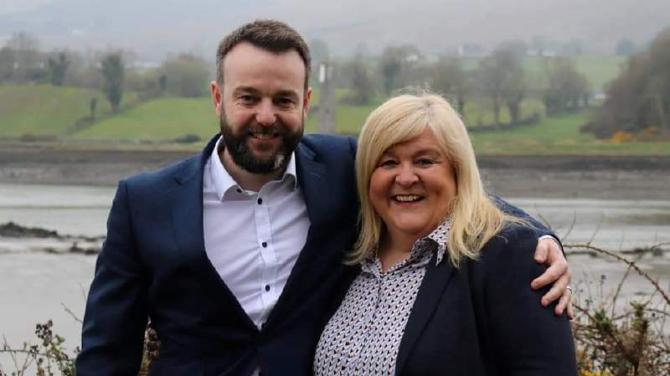 Mr Eastwood was speaking after campaigning with Mrs McKevitt in Warrenpoint.

The pair visited the site of Narrow Water Bridge and discussed the tourism potential of the area, alongside meeting with local businesses and members of the public.

“It was a joy to campaign with Karen McKevitt in Warrenpoint this week. Being out and about and meeting people it was clear to see the high regard and warmth she is held in within this community. During her previous stint as an MLA Karen built a reputation as someone who really fought on behalf of local people and brought the issues that matter to people in South Down right into the Assembly and I’ve no doubt she will be again.

“During my visit we discussed the huge tourism potential that exists right across this area. SDLP Infrastructure Minister Nichola Mallon has delivered huge progress on the Narrow Water Bridge project which will be transformative of this area, attracting investment and changing the way people live and travel. SDLP Minister Mallon has also shown what can be achieved when we work together with the Irish Government to deliver projects that will improve people’s lives.

“ Families are struggling to put food on the table, petrol in their car or heat their homes and that is the SDLP’s number one priority. If we are truly going to address these problems then we need SDLP MLAs like Karen McKevitt fighting the corner of local people at Stormont.”

“We had a great opportunity to bring SDLP Leader Colum Eastwood to Warrenpoint this week to show him some of the exciting projects we are working on and the important role that the SDLP and our Minister Nichola Mallon has played in making them a reality. We were also able to meet with local people and discuss the challenges that are creating huge concern for many, with household bills spiralling out of control people just don’t know where to turn.

“Struggling families want to see leadership to get us out of this crisis, the DUP walked away from the Executive when people where in dire need of support and other parties are more interested in their own electoral fortunes. This is the only part of these islands where there’s not been a single penny of support to help working families and that’s absolutely disgraceful.

“The SDLP is determined to get money into the pockets of people who are struggling, we have proposed emergency legislation at Stormont and Westminster to unlock the £300m doing nothing in Stormont’s bank accounts and have produced a Cost of Living Action Plan to provide funding to get people through the worst of it. If we are really going to get to grips with the problems impacting our communities then we need to elect people who are going to put people first, that’s what I’ve always done for people in this area and I’m determined to return to the Assembly to deal with my unfinished business and get back to delivering for people in South Down.”