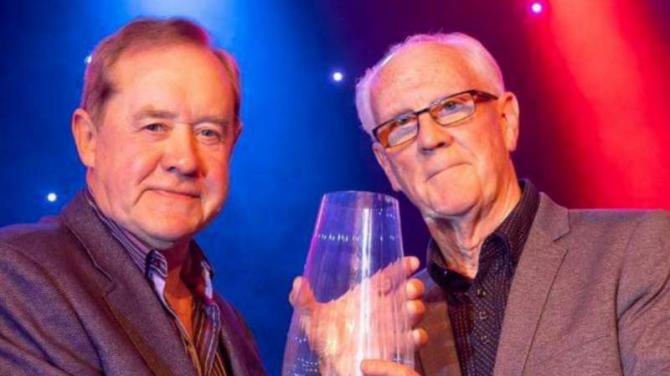 The award was presented to John at the Hot Country Awards in the Slieve Russell Hotel, Ballyconnell in county Cavan.

John Hanratty was given the stage name John Glen when he first joined The Mainliners and came from the fact he was born and raised in Crossmaglen.

John has always had a love for country music and found his love for showbands when he use to go to the dances in his local townhall. John started his career of playing with small local bands before getting his break as the lead singer with The Mainliners Showband when lead singer Tom McBride left in 1975. They released a single 'Sunny Side of the Mountain', which reached Number 5 in the Irish charts.

John stated: " I was actually a mechanic by trade before I started singing. There was just something about the showbands when I use to go to see them in embassy in Castleblayney, when I was about 17 or 18. I just loved to see the 8-piece band playing. I then joined a local group from home, and we would have played at all the local dinner dances and weddings. The mainliners would have heard me singing and I guess they maybe had an eye on me."

John informed me that he had married his wife Yvonne on 3rd May 1975 and joined the Mainliners on the 7th May and the band were doing 7 nights a week, so it was all a bit of a whirlwind for him.

In 1978 John then left The Mainliners to form his own band, The Wranglers. They had great success and toured the UK, USA and Canada and played at Wembley stadium.

In 2018 John re-joined The Mainliners and toured all major venues across Ireland before COVID-19. The band released their new album ‘Roses in The Snow’ during lockdown and it reached number 1 on local chart shows.

"I have two sons and two daughters, and they would have never seen me with the Mainliners, but we always talked about them. Then after Big Tom passed away, we decided we would get back together. The first night we did was up in Donegal and half of Crossmaglen was there that night and it was the first time my family had seen me with the band, it was a great turnout.”

The Mainliners had hoped to promote the new album it on tour, but like many artists covid prevented this:

"We had been set on doing a tour to promote it the album, but everything stopped. We do think releasing it was the right thing to do as we have had a lot of success with it."

John had also had the opportunity to sing for an audience the night he received his award. I asked John how it felt to receive such a prestigious award and being able to play for the crowd since covid:

"It was great to get accept this award, especially the fact it was an appreciation award. I suppose our music did keep a lot of people happy for many years. The show also got a great turnout.

"I was asked to sing ‘The Sunny Side of the Mountain’ and I was a bit nervous if I am honest to be up singing with a different band. Although, they knew the song to perfectly, and we got a great reception. It was also good to see all the young and upcoming performers that were there as I know these past two years and has been very challenging for them. "

Although covid prevented their last tour, the group are hoping to return to the stage very soon for one last time:

"I was 70 there in March and we are all getting older now, but we hopefully would like to get back together and possibly do a farewell tour this year, so who knows what will happen!"

Hopefully, The Mainliners will be back and providing us all with some of their best tracks very soon. Keep your eyes over social media for the possibility of any announcements.