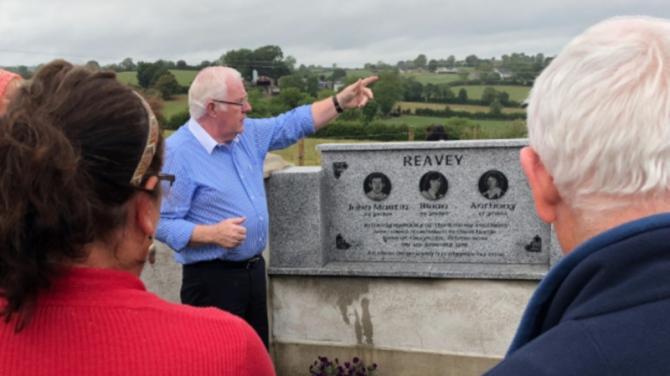 EUGENE Reavey has been featured in a new documentary film focusing on how “true religion” can be used to help build peace and reconciliation in a post conflict Northern Ireland.

Entitled “Guardians Of The Flame” the film has been produced by documentary filmmaker Jonny Clark and focuses on “telling the redemptive stories” of three individuals including Mr Reavey whose three brothers died at the hands of the notorious Glenanne Gang in 1976.

Despite this tragedy the film will focus on how Mr Reavey along with Alan McBride and Beryl Quiqly, the two other individuals featured in the film refused “ to succumb to bitterness and revenge” and instead documents how they allowed for “forgiveness to conquer hate, and how true religion welcomes marginalised, builds bridges and breaks down walls of isolation.”

The film is due to be shown in two screenings at both the Slieve Donard Hotel and Canal Court Hotel on May 17 and 19 of respectively, whereby afterwards Mr Reavey alongside Mr Clark and Mr McBride will take and answer questions relating to the documentary. The screenings are something that Mr Reavey claims “he is absolutely looking forward to” stating that be believes Jonny Clark has “done a great job”

“I am absolutely looking forward to the screening of the film, I think Jonny Clark has done a great job, he is a brilliant fella. “Jonny is the walking epitome of anyone that wants to believe in reconciliation. I have seen him up in the monks in Rostrevor and I have seen him talking to all the different faiths and he is one good fella, the very best.”

Mr Reavey related first being approached by Mr Clark and being asked if he would be interested in appearing in “Guardians of the Flame” with another iconic figure of peace and reconciliation in Northern Ireland also subsequently getting involved in the film in the process.

“Jonny Clark phoned me up and asked me if I would do an interview for him, I said I would and he landed out here with another fella. We held an interview at the table in the kitchen. During this interview I said to Jonny that he should have Seamus Mallon feature in the film.

“We then travelled to Belfast and we interviewed a lady called Beryl Quigly whose own husband was killed in 1984.

“We also paid a visit to the Presbyterian church on University street in Belfast and there is a fella in there called Steve Stockman who is from Ballymena. Steve Stockman is part of a group called four-corners along with Father Martin Magill who was the priest who spoke at Lyra McKees funeral.

“Just this week Steve Stockman and Father Magill and Steves wife were invited over to Rome for an audience with the Pope. This goes to show you the power of reconciliation and where it can take you.”

Mr Clark, who is the chief producer of Guardians Of The Flame provided detail on what the true purpose of the documentary is stating that the projects title was inspired by a quote from a famous religious leader likening religion to fire.

“Guardians Of The Flame is based around a quote from a well know writer who passed away number of years ago, Rabbi Jonathan Sacks who said that "religion is like fire and like fire it warms but it also burns and we are the guardians of the flame.”

“So, the premise of the film is looking at the troubles in Northern Ireland and asking the question of to what degree was religion involved in the conflict, as well as profiling the voices who have suffered immensely but have maybe found a generous perspective on life.

Alongside religion Mr Clark also claims that another central theme to the film , is that of humanity triumphing in the face of injustice.”

“Guardians of the Flame explores themes such as forgiveness, reconciliation and social justice which are core to the stories presented in the documentary, but perhaps what is most common between the three main characters presented in the film, is the way in which they seek to understand the killers of their loved ones and seek justice in a way which does not perpetuate violence and further division. ”

As part of the events planned at the screenings of the film at both Slieve Donard and Canal Court hotel there will be facilitative discussion focused on mutual understanding and peace-building based on themes from the documentary and suitable for a variety of ages and backgrounds.

The challenge of the discussion will be to grapple and engage with the relevant political and religious issues, through constructive interactive debate in response to watching the film.

The overall intention of both events is to increase mutual understanding and further peace-building across the religious divides in Northern Ireland, and to strengthen social cohesion in all communities by building tolerance and understanding between people of all ages from various backgrounds and from across Northern Ireland's sectarian divide.

The hope is that participants will  leave feeling encouraged to move towards  people of difference, to  embrace diversity and uphold our common humanity in the midst of division and to be equipped with  restorative methods of conflict transformation so as to build more peaceful communities where Good Relations will be enhanced.