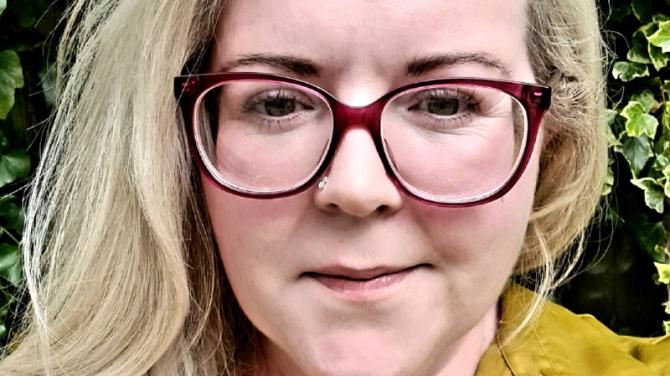 NEWRY born playwright Cliodhna McCallister has written an on-stage adaptation of the classic Mary Engel novel “Bear” which is due to be performed at the upcoming Cathedral Quarter Arts Festival in Belfast.

The novel, which upon publication in 1976 was labelled as “the most controversial novel ever written in Canada”, is arguably Engels most successful work of fiction, going on to win the prestigious Governor Generals Literary award, the highest accolade that can be awarded to any work of Literature in Canada.

The significance of the fact that Cliodhna’s adaptation of Engels novel is the first ever on-stage production of “Bear” is not lost on the playwright, with Cliodhna stating that although she has “written plays before” this is the “first adaptation that she has ever written” claiming that the process of doing so was “a bit of a hefty responsibility.”

“While I have written plays before this is the first adaptation that I have ever written and produced. It is a bit of a hefty responsibility.

“Earlier this year I started to get mentored by Patrick J O'Reilly who is the artistic director at Tinderbox Belfast. He helped me through the process of developing an on-stage adaptation of the novel Bear which was written by a Canadian novelist Marian Engels. It has never been adapted for on stage performance before. I have written the adaptation and have also directed it. The play will premier in the Cathedral Quarter Arts Festival. Our plan will be to take it for a full run in Belfast and then a full run in Dublin.

“The novel was published in Canada in 1976 and it was described in Canada as the most controversial novel in Candian history. Despite this it received the Governor Generals Literary Award, which is the highest Canadian literary award. The novel itself was banned in America for years and was’nt never published in Europe until last year.”

Cliodhna related key plot elements of “Bear” which when taken into consideration provide a significant degree of insight as to why the novel was considered so controversial at the time of its publication.

“The content of the novel is a little bit controversial. The novel is about a woman who is an archivist and she gets sent to this remote Canadian island to archive the contents of this old colonial house. Also on the island is a bear that she falls in love with. While initially her feelings towards the bear are sort of loving and nurturing, ultimately her feelings towards the bear become quite sexual. She then pursues a sexual relationship with this bear.

“While I don't want to give away the ending, she is existing in a bit of a fantasy world where it makes complete sense and it is totally normal that she would have a relationship with this bear. Obviously though it is a bear and this is a dangerous pursuit for her.

“The novel itself is based on an old first nation fairy tale from the indigenous peoples of Canada which is about a woman who is married of to a bear. Whenever I was researching the novel, I learned that this is actually quite a common trope in legends. There is actually a legend in Ireland that Saint Brigid was born from a woman who had her with a bear. So there exists a lot of history of this notion of women and bears breeding great people.

“Marian Engel was kind of riffing on this trope. Her goal in writing the novel was to explore the sort of maleness that women are typically kind of socialised to look for and the inherent danger of this and how it is dangerous to be a sexually autonomous woman.

“Mary Engel was an incredible author and I really wanted to respect her legacy and what she had set out to do with the novel. She wanted to make the point that to be a woman, even at the time the book was published in the 70's and even now to be a woman and put yourself in a position alone with a man you nearly have to be insane because of the inherent dangers of it. This is probably the quite radical perspective that she was coming from. There has to be cognitive dissonance. To be aware of the risks and still go ahead with it, this feels really relevant.”

While providing her analysis of the plot of the novel as well as expressing her admiration for its author, Cliodhna provided detail on the difficulties that she faced in adapting the novel into a screenplay for on stage performance, stating that one serious challenge she faced with this project was “compressing everything in the novel into the space of about an hour because you can only really keep an audience on their seat for one show for this length of time.”

“Writing the first initial few drafts of the adaptation was a big challenge because initially I tried to be a little bit cautious and not going sufficiently far. You start of with things and try to sort of rationalise it somewhat but I ended up having to scrap a lot and then going the full way with it and just trusting that the content will do what it needs to do without me trying to apologise for it.

“Bear isn't really a long novel at all, it is only about 20 short chapters but because a novel can do things that theatre cannot do, adapting something like this is like taking one of the Game of Thrones books and trying to put it on stage. When it comes to real time action, what a novel can do in one page you cannot accomplish without a lot of action on stage so compressing it was definitely a challenge.”

“Also, the adaptation that I have written consists of just one person, it is a one woman show. Aoife Honohan is the actress who is performing in the play. She has acted for my company a number of times before. There are two other characters in the novel besides the bear and Lou, the main character in the novel.

In the adaptation Lou begins to recount episodes of other characters and Aoife will play these other characters to so there is a little bit of multi-rolling her to. This is a bit of a technical challenge for us.

“How I have chosen to approach the on-stage adaptation is that whenever you see the character first the lights go up and you see the lead inside the colonial house and it is after everything has happened.

“However, from an audience's point of view we don't know what has happened only that something has happened. The play begins with her barricaded inside the house and there is a bear outside, so she is kind of under siege throughout the course of the play while the audience is kind of figuring out what is happening.

“For a kind of ridiculous premise, once you start reading the novel and once you are in it is totally plausible and it is totally believable and this is the thing that is so remarkable about the novel. This was probably the most challenging aspect in adapting the novel for on stage performance. The audience really has to believe that a woman would find herself in this position.

“At the same time, I had to make the adaptation different to what it was.

“It is not the novel and I did not want the adaptation to be a rehearsed read of the novel. Treading this line was interesting and I got a lot of help from my mentor.”

Bear will be debuting at 2 Royal Avenue House Belfast and with showings on both Thursday (May 5) and Friday (May 6).

In honour of the fact that the playwright who brought Mary Engels vision to the stage hails from Newry, a special offer has been made to any and all of those who hail from Cliodhnas home town who come to see the play in Belfast

“We want to offer Newry audiences one free ticket on bookings for two or more people. Simply book your tickets (minus one) and send us your booking reference. We'll add another seat to your booking for free.