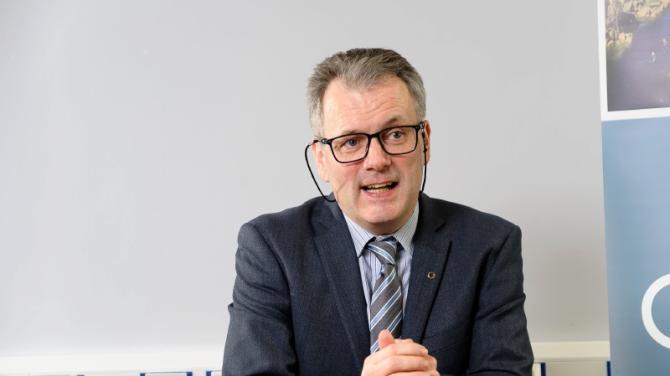 Gael Linn Board of Directors is pleased to announce that Réamonn Ó Ciaráin has been appointed to the role of CEO.

Welcoming Ó Ciaráin’s appointment, Pádhraic Ó Ciardha, Gael Linn’s Chairman, said: ‘I congratulate Réamonn. His understanding and experience will serve both him and the organisation well in implementing Gael Linn’s progressive policies in the coming years. He will have big shoes to fill but we are confident that Réamonn possesses the ability and dedication to do so.’ Réamonn began working with Gael Linn in 1993, was promoted to manager in 2003 and to Director of Education in 2020. He was born and raised in Crossmaglen, Co. Armagh where he attended St. Patrick’s Primary School and later the Abbey Grammar School, Newry. He holds a degree in Education and Celtic Studies from Saint Mary’s University College, Belfast, an MA in Irish Studies from QUB and an MA in Cultural Management at Ulster University, Jordanstown. Réamonn has authored three books on Cúchulainn which were published by Gael Linn, as well articles in a variety of publications. He is co-founder and Chairman of Aonach Mhacha, the new Cultúrlann in Armagh City. He has held many officer roles within the GAA at county level, as well its National Committee for the Irish Language. Réamonn has a long connection with ULTACH Trust and became its Chairman in 2019. He has been a member of the Board of Governors of St. Catherine’s College, Armagh since 2006, as well as being a former Chairman of An tUltach, the Comhaltas Uladh magazine. Réamonn is married to Dolores and they have two children, Alana and Caoilte. Commenting on his new challenge, Réamonn said: ‘I very much look forward to taking up this new role in an organisation which has so greatly influenced awareness in relation to the Irish language and its heritage for almost 70 years. Gael Linn has a committed and capable team and I welcome the prospect of working closely with them in the future to achieve Gael Linn’s objectives.’

Réamonn takes up his post as CEO of Gael Linn on 1st June succeeding Antoine Ó Coileáin who is retiring after twenty years in that role, one of the longest-serving heads of an Irish language body in recent times.