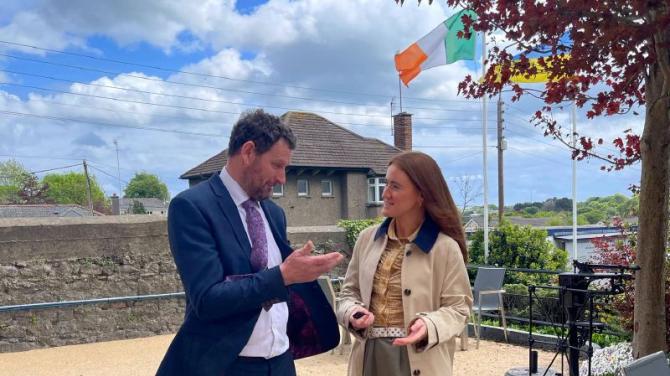 This week Colm Markey MEP discussed his views on the recent news surrounding the DUP failing to elect a speaker in Stormont on Friday (13) .

Following the latest elections to the Northern Ireland Assembly, the DUP leader Jeffrey Donaldson will not nominate ministers to Stormont's governing executive until concerns regarding the protocol were resolved. The action of not electing a speaker has led to disenabling the functioning of the Assembly.

Colm Markey is a member of the European Parliament representing the constituency of Midlands North-West. This term one of his many priorities is aiming to building strategic relationships post-Brexit.

When asked about his views on the actions of the DUP and whether he believed the DUP should have waited and discussed their problems within the Assembly he stated:

"What the DUP does is a matter for the DUP. Of course, dialogue is a better way forward than boycott and I was glad to hear Boris Johnson calling for the restoration of the executive as soon as possible. Voters went to the polls a fortnight ago because they want solutions to everyday issues, not stalemate. "

After these actions, there is fear that Irelands membership within the EU could face to be endangered. Speculation has risen in regard to the possibility that this could result in the Island of Ireland being back on the brink of a hard boarder.

Mr Markey is urging for the UK Prime Minister Boris Johnston to "pause and think of the consequences of taking unilateral action on the protocol."

Mr Markey stated: "I think it’s disappointing that the DUP chose not to re-enter power sharing at Stormont. It’s clear that voters in Northern Ireland want their representatives to deal with the ‘bread and butter issues’ and are not interested in political games anymore. There are more pro-protocol voices in the Assembly than anti-protocol and no one party decides the way forward on this particular issue. This is a matter for the EU and the British Government, and I’m urging the British Prime Minister to pause and think of the consequences of taking unilateral action on the protocol and what that would mean for ordinary people right across the UK.

"Ireland is proudly pro-EU and we recognise the fact that the EU is willing to be flexible in how the Protocol should be implemented in a way that avoids a hard border whilst protecting the integrity of the Single Market. What we need now is the UK to show the same level of pragmatism."

In the European Parliament in Brussels MEPs and UK parliamentarians gathered on Thursday and Friday for the first meeting of the EU-UK Parliamentary Partnership Assembly.

The meeting was set to discuss the state of EU-UK relations and the war in Ukraine. One of the subjects of matter risen was what structures would be appropriate in order to make sure the voices of in Northern Ireland were heard through the Assembly in the European Parliament. These structures are in order to ensure that the unique position of NI is recognised.

Mr Markey had hoped to have seen larger representation from Northern Ireland at the Assembly meeting last week. Although, informed that Sir Jeffrey Donaldson is in fact a member but did not appear to “ to even show up.”.

Mr Markey exclaimed: "I would have liked to have seen more representatives from Northern Ireland on the EU-UK Parliamentary Partnership Assembly. Sir Jeffrey Donaldson is a member but failed to even show up at the first meeting last week. I think there’s room to hear more NI voices in the EU-UK Partnership Council, particularly through the Specialised Committees where stakeholders could contribute.

"The reality is we don’t have MEPs from Northern Ireland anymore due to Brexit, but the unique position of Northern Ireland is something that all Irish MEPs from all parties are vocal about, whether it be at Committee level or in the European Parliament as whole. We will continue to ensure that Northern Ireland has a voice in the EU.”

According to the DUP the protocol has eroded the foundations devolution was built on and undermined Northern Ireland's position in the UK. In my discussion with Mr Markey I enquired what he thought could be done to encourage Unionists on the protocol without threatening their British Identity:

"I appreciate the concerns of the Unionists, but we have to remember that the DUP opposed Theresa May’s plan which would have avoided a border down the Irish sea or between Northern Ireland and the Republic of Ireland. We’ve been having this debate for 6 years now and people and businesses from Portrush to Newry want and deserve some certainty.

"I think the comments from the British Prime Minister on Monday are correct. There can be a landing spot in which everyone's interests are protected but we need the UK to engage constructively with the EU to find those solutions. There are massive economic opportunities for Northern Ireland under the Protocol, and this is something that should be promoted more across all communities."