"I will watch proposal with interest" - Michael O'Hare 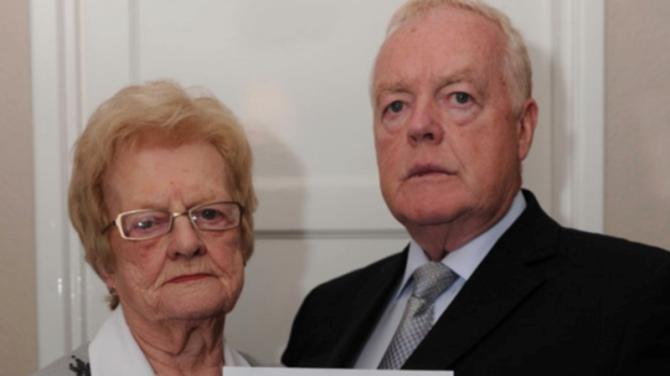 Michael, whose twelve-year-old sister Majella was shot dead by a British Army paratrooper close to Balymoyer Cemetery in Armagh 46 years ago, made the statement in relation to the proposed update on the statute of limitations on troubles related crimes that was detailed in papers published after the queen's speech which was delivered to Parliament last week.

Effectively, the update to the proposed blanket ban on all troubles related prosecutions would involve any individual seeking an amnesty for crimes committed in Northern Ireland during the troubles to potentially have to co-operate fully with any and all truth recovery investigations before an amnesty for their crimes would be granted by the government.

Although Michael would like to make the point abundantly clear that does not, never has and never will support the implementation of a statute of limitations on troubles related crimes, he will watch the new proposed update to the statute “with interest to see how it progresses” and to observe “ how many come forward to make an effort to see if it gets the support that the government thinks that it is going to get.”

“I will watch this proposal with interest to see how it progresses and how many people come forward to make an effort and to see if it gets the support that the government thinks that it is going to get.”

Although Michael, who has campaigned tirelessly alongside his family for the past four decades to get Majella the justice she deserves, does state that the truth coming out at this stage “would be helpful”, he is still opposed to an “amnesty across the board.” This is because he believes this new development in regards the statute of limitations “is just another guise to release any veterans from the possibility of being brought back to court.”

“I want the truth and the history of the killing of Majella to be written accurately. If the truth came out it would be helpful but I am still against an amnesty across the board. This is because I think that this is probably just another guise to release any veterans from the possibility of being brought back to court on behalf of the government.

“I can't say that I would be happy with the possibility of the soldier who shot Majella coming forward as I think he probably won't do it so we are still left high and dry. I think the government just want to try and make the people move on and forget about it. Truthfully, I believe the chances of anyone coming forward to give an explanation for their actions is very slim as they spent a lot of time trying to avoid that. The system that they are proposing now just leaves the door open for people to walk away.”

Michael was keen to reiterate why it is he, and so many other victims' campaigners like him across Northern Ireland are so ardently opposed to the introduction of a statute of limitations on crimes committed during the troubles stating that his honest opinion on the whole matter is that “there should not be an amnesty for anyone who murders a fellow human being.”

“My honest opinion on the whole matter is that there should not be an amnesty for anyone who murders a fellow human being. There is no point in saying that it is alright, when it isn't alright, no one is above the law and they should be held to account for the things that they have done.

“I also think that there will be a lot of people who will oppose this. It is not just as easy as brushing or sandpapering over what happened. People are hurting and they are not being in any way consoled by this. Things won't be alright. If you have committed murder, you must stand up to the law and you are not above the law.

“This has always been my stance and I mean this right across the board because 3'700 deaths is a lot and the impact of this is phenomenal because it is not just these 3'700 people that are affected it is whole families and the wider repercussions that these deaths have. Trauma bleed is a terrible thing. I have two daughters myself and they are affected by what happened to Majella, even though they never knew her.”

Despite the fact that over 46 years have elapsed since Majella’s death, Michael claims that the pain of her death “is worse for him now then when it happened”

“To be honest it is worse for me now than when it first happened. It is one of those things that just doesn’t go away.

“In the short-term, Majella's death was a total shock and then the realisation as the years went by of what happened bred the trauma. Everyone in my family was traumatised, both my mother and my father, but my father particularly because of his close proximity to what happened, he was only yards away. Not only that but the abuse that was dished out that day to him was terrible.

“When you are young you compartmentalise it and you get on with life because there is so much else happening in your life but as you come up to mid-life, it begins to haunt you again, this is just the way that it is.

“We have to fight for our loved ones. If the amnesty comes through, then there is definitely no chance of us getting justice or peace. Justice for Majella will be lost. I am not prepared to sacrifice that possibility. The truth needs to materialise, and they are saying this now but in six months' time it may be that no one has come forward.

“We still want justice and if we agree to this type of system now it may never come and materialise and then justice is gone because the amnesty will be voted in. So, at this point in time, we still need to fight.”