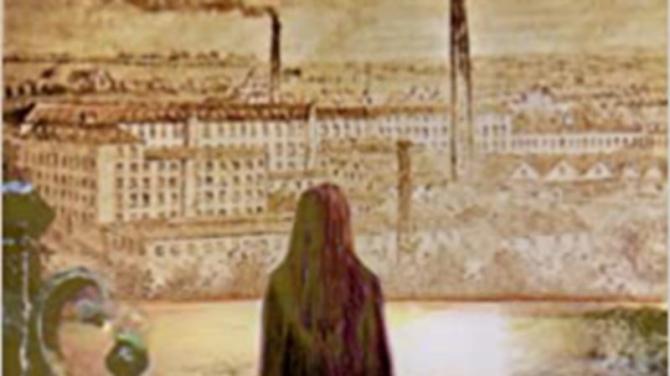 MANCHESTER based author Martha Ashwell has penned a new book set in the humble County Armagh Village of Bessbrook.

"The Happening at Bessbrook" tells the story of one Evie O'Dowd who lives a humble life as a mill worker in the eponymous town of Bessbrook in the infancy of the twentieth century. All is going as well as it can for Evie in what is an already very challenging existence until she is struck down by a mysterious illness which leaves her family fearing for her life. Thankfully though the young country girl manages to make a full recovery

However, whenever Evie does regain consciousness, she begins to relate tales of befounding spiritual visions from the beyond. This leaves both the local townsfolk and clergy more than a little bit sceptical as she has no concrete evidence to substantiate her amazing claims of spiritual transcendence. This does not deter Evie however from using this experience as a way to try and find a new meaning in her life through personal faith and determination.

Elaborating on where she found the inspiration to write her new novel, The Happening at Bessbrook's author Martha Ashwell, cited her own personal journey to learn more about her biological father, known to her in her childhood as Uncle Sam, which ultimately resulted in her penning her first book Celia's Secret: A Journey towards Reconciliation, as the key motivating factor behind writing a novel set in the humble County Armagh Village.

"I am originally from Manchester and I was born there in the 1940's. My whole story of coming to Bessbrook to find out more about my father is detailed in my memoir Celia's Secret, a Journey towards Reconciliation. Our father was the Irish connection, he was born in Bessbrook and he emigrated to Manchester where he worked. He had a relationship with my mother during the war years and all four of us were his children, although we were never told this in childhood. We knew him as Uncle Sam and he was in and out of our lives.

"It was only when I went away to college that I sort of could look back and see more objectively what my life had been. I became more and more convinced that the situation wasn't as it was described. It took me all throughout my twenties to find out that Uncle Sam was my father. I found out from my mother's friend that yes indeed my suspicions were right and that Uncle Sam was indeed our father.

"By this time, he had passed away and I was about to be married. My husband shared with me the search for the truth. There was fallout from finding out that Uncle Sam was in fact our father because I challenged my mother about it and she was very angry with me. Obviously now in a more enlightened age know that it was absolutely my business to know who my father was.

"This is why my first book was called Celia's Secret, a Journey towards Reconciliation because I have spent a long time and a great deal of reflection trying to find a way forward in my relationship with my mother. I absolutely adored her as a child and I went on loving her all the time. However, we still had this quite serious difference of opinion in regards telling secrets to my siblings. My siblings didn't know, I was the one who carried it all those years and she didn't want me to tell my brothers and sisters."

"I knew as a child that Uncle Sam came from Bessbrook in Northern Ireland because he went back to visit two to three times a year and he spoke about Bessbrook so this is how I knew he was from the village. I first went to visit Bessbrook in 2014 when I started writing the memoir book Celia's Secret: A Journey towards Reconciliation to try and find out a little bit more about my father, look up church records and visit graves and so on which I did with one of my brothers who came with me. When we conducted our research in Bessbrook we found the Church records of the baptisms and marriages and so forth. The minister came in at one point and told us that he knew who would have been my own nephew. The minister told us that unfortunately he died a short while ago and his wife is also dead, but they have got four children, one of whom still lives in Bessbrook and this is how I got in touch with my great Niece."

It was during the time that both she and her brother spent researching the history of their biological father in Bessbrook, that the inspiringly beautiful village started to make an almost indelible impression on Martha as an artist , so Much so that after authoring her first book documenting the efforts that she went to in uncovering more information about her father that the idea began to form that she should also pen a work of fiction set in the Rural county Armagh Village. Martha also praises the late Graham Hanna as providing some key first-hand accounts of what it was like to work in the old Mill in Bessbrook that no doubt added an extra layer of verisimilitude to her magnum opus , as well as the renowned local historian Sam Hanna as providing a thoroughly detailed level of knowledge and research that also helped considerably in the writing of "The Happening at Bessbrook."

"I looked around Bessbrook and I got a feel for it, I got a real feel for Newry and we stayed in the Canal Court Hotel. We also visited the Newry and Mourne Museum. This is when we meet Graham McAteer. Graham, who sadly died a number of years ago, was wonderful. He told us a lot about working the Mill in Bessbrook. Graham was very friendly with a gentleman who would have been my nephew and worked in the mill alongside him for a while. Graham also told us a lot about the surrounding areas. Sam Hanna, who is a well-known local historian in the area also provided a lot of knowledge as well. So, I gained a lot of information and really developed an affection for and association with Bessbrook.

"Some years later when I was thinking of writing a novel, I was considering basing it in Bessbrook because I knew quite a lot about it already. I did more research into the Mill and how people worked in the Mill. I had also developed an idea of the Mill houses in Bessbrook because I visited one of these with Sam Hanna. I just gathered all the information I could and went back for a second visit a couple of years later, so this is how I came to write about Bessbrook."

Whereas the stunning landscapes of Bessbrook and the surrounding area may have served as the primary inspiration for the setting of Martha's new novel, its titular character of Evie's comes from several different sources, not in the least of which would be Martha's own life experiences and a sibling of her father Uncle Sam.

"Little Evie O'Dowd who is the main character of the novel is a very modest and shy person to begin with , but she eventually gets stronger and stronger as the story progresses. My father was one of seven children, only one of whom was a girl and she worked in the Mill, so I did empathise with her a little bit as well.

"Evie is based on a great deal of what I have read and my experiences in life. I know what it is to gain strength and motivation as you continue with your life and how life absolutely needs to have a central purpose. This was very important to Evie as a character.

"Faith is also very important to Evie as well, although I know this can be a very tricky topic in Ireland. I myself am from a Catholic background and my father himself was from a Presbyterian background. I wrote Evie as a Catholic character because I knew more about the processes and practices of the Catholic faith which are detailed in the book as well because it was very much part of the family life.”

Without elaborating on the plot of the novel to such an extent that it would spoil any first read through, underlying the story of Martha's work is a prevailing sense of existentialism and a need to try and find some kind of objective meaning in the universe. Martha claims that she believes, based of her own life experiences, that if such a kind of meaning can be found then it will in her own opinion, "enhance the quality of life considerably."

"I got an idea which I wanted to convey which is that we all have to find something in life that we feel fulfils us whether it be writing, medicine, teaching or whatever it may be. This is a way in which I could frame this belief because after Evie's experience she feels very strongly that she needs to find a vocation and fulfil this vocation because she has a very strong feeling that she needs to have a purpose to fulfil in her life.

"This concept of finding purpose is the centre of the story, and I do believe in it. I believe that if people can find a true purpose, something that they really believe is sufficient to motivate them to do good things, it enhances life tremendously.

"This is something that has carried over into my own life. I retired several years ago and now part of my later life I feel like I want to write. As a child I was always very interested and good at writing but I never pursued it. I first thought that I would write a memoir because this is what I know most about and then later I decided to write the novel "The Happening at Bessbrook."

The Happening at Bessbrook is available to purchase from Amazon. You can learn more about its author Martha Ashwell on her own official website of http://marthaashwell.co.uk