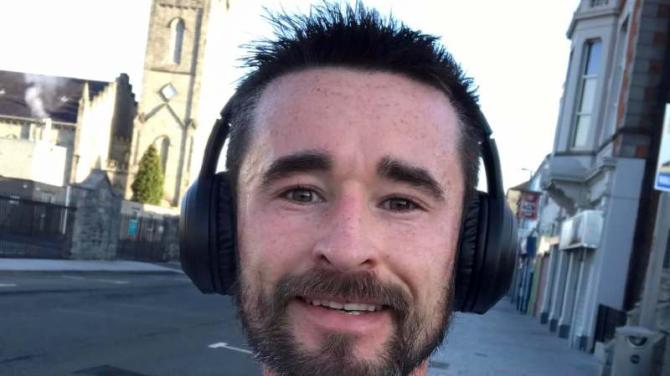 NEWRY native Barry Bannon has come to the end of an over three month long running challenge to help raise funds for the Davina’s Ark aftercare addiction centre.

Barry, who suffered from an addiction to alcohol in the past which in his own words left him not knowing “what to do or what to live for anymore”, was inspired to undertake the challenge which involved him running 10K a day for 100 days as a means of giving something back to the organisation for the help and support they provided which set him down the long path to recovery.

Now at the end of the challenge it is Barry’s hope that in telling his story he can encourage other people who are also struggling with addiction to reach out for help as well as simultaneously inspiring others to do something similar to help out a charity that does such exceptionally good work within the community.

Barry can trace the beginnings of his problems with addiction back to his teenage years claiming that he first turned to alcohol for its “anaesthetic” properties which helped him deal with the considerable amount of pressure he then had in his life.

“My dependency on alcohol stemmed from my teenage years, there was always a problem with addiction,”

“At the time I had put an awful lot of pressure on myself and doing things for other people such as work and stress, this is when I turned to alcohol for an anaesthetic. It was to cover up the up issues that I was having with my mental health and the way I was feeling.

“I was trying to put a mask on and keep a mask on. It then escalated into what turned out to be a serious alcohol problem where I was drinking every day of the week.

“I knew that I had a problem whenever my addiction had escalated to a point where it had become normal. It was hard to see it because it had gradually taken hold of me over a period of time. Obviously, I did know that it was a problem because I was hiding it and I was drinking more and it was every day. It turned into a real struggle because I was leading a double life. I was still working full-time and I had a family and a young child.

“I was leading a second life that no one was aware of becasue I had severe mental health problems. For myself you grew up expected to do this and do that and just get on with it and you don't really get a chance to acknowledge your feelings. For a man you are expected to just sort of man up and get on with it. This went on for a long period of time until I physically couldn't hide it anymore and I just couldn't take it anymore, it was mentally and physically draining.”

Barry states that it is thanks to the actions first taken by his wife that he got in contact with Davina’s Ark for assistance at a time when he knew he had to take “any available help to try and change (his) ways.”

“My wife was the first to seek out Davina's Ark and I was at the stage where I knew that I had to take any available help to try and change my ways,”

“When I first got in contact with Davina's Ark, I knew that no matter what my experience was or what it is I was going through they just accepted it and would work with it. I never felt judged and they really did take the time to work through what was best for me as an individual. As well as this they were also very mindful of my family because addiction doesn't just affect the family it also affects the persons family as well.

“I found the help that they provided brilliant because they really did help me to learn how to move on from my addiction and live my day-to-day life without it. They broke down what it is I was doing on a day-to-day basis and what it is I was doing to fill my time. Over time I was made aware of my trigger points. When you are suffering from an addiction, the substance that you are addicted to likes for you to be isolated and on your own and shut away from everyone else.

“Davina's Ark helped me to become aware not to do this, or come into contact with any other triggers that might set you off or cause you to relapse. With this they do talk about people places and things, that being if there are any people or places or things that you may do that are a bad influence on you then to shut yourself off from them.

“They also made the point to fill your time with activities that keep your mind off your addiction. They also placed emphasis on communicating and not being afraid to say how exactly it is you are feeling. Obviously, the way that you communicate with close family members and love ones can help you to realise that there is a solution to every problem.

“Davina's Ark also provided services such as counselling, group meetings and education on the topic of addiction. I found it from the start and even now going to counselling sessions I always come away having learned something. Davina's Ark really does provide information on the science behind addiction and how it affects your brain and your body and you have to try and reverse the effects of it.”

It was owing to the guidance given to Barry by Davina's Ark on how to best restructure his daily routine and effectively prioritise his time which provided inspiration for what would be the best way for him to show his due appreciation and gratitude to the organisation that had aided him in overcoming his addiction to alcohol.

“At the time whenever I was trying to turn over a leaf and have a new life, I got myself out walking and this progressed into running.

“Having been made aware of the science behind addiction by Davina's Ark, I was out running on a regular basis because this was part of my new routine, being out and about and being more active. The idea to give something back to Da Vina's Ark came to me before Christmas because I just wanted to give back to the organisation because they helped both myself and my family out so much.

“In effect I was using my new hobby of running to good use as a way to fundraise for Da Vina's Ark.”

In addition to utilising his new found fondness for running as an effective means to fundraise for Davina's Ark, Barry would also like to use the attention that his altruistic endeavours are currently receiving to educate and enlighten others on the subject of alcohol addiction as well making his own contribution to remove the stigma surrounding the topic.

“I was excited to share my story and to just try and raise more awareness and get people thinking about addiction to remove the stigma that people associate with the topic. Through this fundraiser I wanted to help those struggling in silence to reach out and get help and to remove the stigma surrounding addiction.

“Alcohol is often perceived to be this good sociable thing when in actual fact it really isn't. The way I see it, it is just a sociably acceptable drug. I have read books regarding the topic that break alcohol down to what it actually is and until you actually see alcohol for what it is you do not realise that it is not all the fun and games that it is made out to be.”

“Whenever I first started, I originally wanted to do a 10k run/walk every day but as time went on, I just really surprised myself in how mentally and physically strong I could be to continually run every single day throughout the whole challenge. “Through the course of doing this I feel really, really good, physically, mentally and emotionally. I have really surprised myself and I just hope that my journey of doing this challenge has inspired someone's to do something similar.”

Having journeyed down a long road both in the literal sense with his athletic endeavours and in a metaphorical sense after having walked down the long winding road of recovery from addiction, Barry has some final parting words to anyone who may be finding themselves just about to make the first step on the same road that he now has thankfully placed behind him.

“My advice to anyone struggling with an addiction would be to reach out and ask for help. Start with people that you know such as close family and friends and do not be afraid.”