Hopes for a social supermarket for Newry 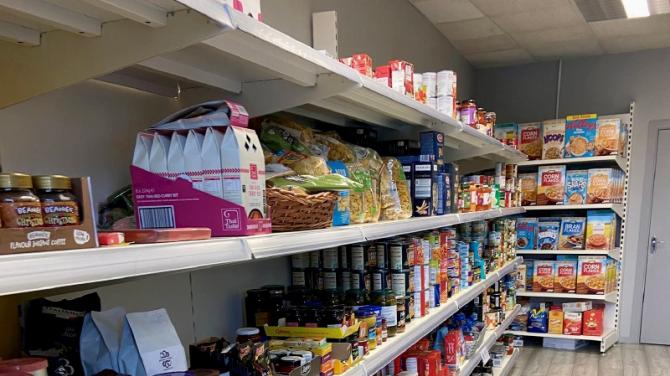 Introduction of a social supermarket to the NMD District could be one solution to the food crisis.

Newry and Mourne co- operative and enterprise agency met with the Newry Mourne and Down Community Planning Strategic Stakeholders Forum to advance the plans for a Social Supermarket for the district to help address food insecurity.

The increased cost of living and energy bills has skyrocketed, and many people are having to make the decision between heating and eating. The usage of foodbanks is available to the Newry, Mourne and Down community but many may result to them when they are requiring an emergency food supply.

A social supermarket sells products that are reduced from the original price by up to 70%. The service would be available to anyone with the NMDC area who is experiencing food poverty, a low disposable income and willing to become a member and develop a success plan.

She said: "In discussion with the Council it was agreed that SSF would take on all the scoping exercises under Social Enterprise. Senior Social Enterprise Executive, Stephen McClelland and his team put together a report of how a social supermarket would benefit and work in NMD."

The meeting was held to discuss the report on Friday (20th) and the members are to examine it and return to discuss any changes or feedback they have on the 6th of June. The proposal will then be taken to the Council, and they will take it to the DFC department and a decision will be made.

The increased cost of living has led to people having to cut back on their usual food expenditures. Although there are foodbanks some may not want to use them as they feel a sense of discouragement as they want to financially be able to provide for their family. The social supermarket will allow these people to do that:

Rosemarie stated: “What is different about a social supermarket and a foodbank is a foodbank is for emergency food supply. A social supermarket is for someone who is living with longer term poverty, maybe as a result of losing their job change of circumstances within the family there are many reasons why people may need the support from a Social Supermarket.

Members within the social supermarket scheme will be able to purchase a range of lower priced good such as dried good, fresh and frozen food and fruit and vegetables.

When a person becomes a member of the social supermarket, other services will also be made available to them.

Members will be offered other support services available with our local community managing budgets, skills training, support for family members it is the wraparound service which makes a social supermarket unique.

Although it is just the beginning Rosemarie is excited for the hopeful future this Social Supermarket could bring to NMD.

“The social supermarket idea was brought to the NMDC six months ago and everyone was very enthusiastic, I definitely do see a need for it.

We know it’s going to be a slow take off, but I am excited about it as being the Manager of community Advice, I can see the value of a social supermarkets in whatever format it takes.”

Senior Social Enterprise Executive of NMD co- operative and enterprise agency Stephen McClelland is looking forward to the prospects a social supermarket holds. He is also head of research, consultation and planning of the social supermarket.

After the recent success of the social supermarket scheme in other cities across NI, this could be one solution to the food crisis in NMD.

“The Department for Communities (DfC) set up and funded 5 successful pilot Social Supermarkets since 2017. This was in response to the Welfare Reform Mitigations Report (Evason, 2016) which recommended, ‘Stormont should pilot strategies to tackle food poverty, potentially through a network of community food shops, social stores and supermarkets.’

“These pilot social supermarkets have levered in considerable amounts of other financial and non-financial resources from the community and private sectors and there is early evidence of individual, community and broader economic, social and environmental benefits. Following this positive evaluation of the pilot programme the Minister wanted to see the Social Supermarket model supported across Northern Ireland.”

Stephen then went on to speak of the increasing rise in inflation to date:

“At time of drafting our consultation report inflation has hit a 40-year high of nine percent (May 2022), but social security payments will rise by just 3.1 per cent, based on economic data from September 2021. The Joseph Rowntree Foundation describe it as the greatest real terms cut in the value of basic unemployment benefits in 50 years.

The Senior Social Enterprise Executive then went on to discuss the overwhelming pressures that foodbanks are facing due to the increase in food prices and energy bills. He stated:

“Foodbanks are overwhelmed and even people in employment (the working poor) are finding it difficult to make ends meet. People faced with soaring energy and food prices are forced to make a ‘Sophie’s Choice’, of whether to heat or eat. This crisis is being exacerbated by the impact of the war in Ukraine, the effects of Brexit and the current stalemate at Stormont. It was against this backdrop that this consultation was carried out.

“A positive note from our extensive consultations are the stories of compassionate communities across Newry Mourne Down and South Armagh taking action to support each other at this time. Community self-help is a strong tradition in Newry, Mourne, Down and South Armagh that has always come to the fore across our district in times of crisis and was most recently seen in the community and voluntary sector response to Covid 19."