Wildfire damage across the Mournes assessed by DAERA and Partner Agencies 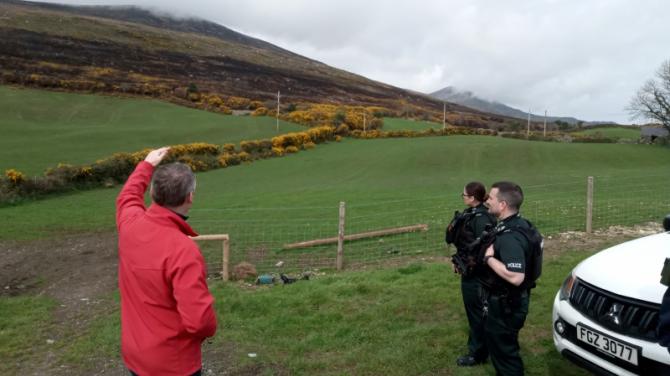 Department of Agriculture, Environment and Rural Affairs (DAERA) officials have been assessing the damage caused by recent wildfires across the Mournes.

Minister Poots said: “Between the 1 March and 13 April 2022, there were 45 wildfires which caused damage to an estimated 720ha of land mostly within the Eastern and Western Mournes which are both designated Areas of Special Scientific Interest (ASSI).

“As we approach the summer season, with dryer weather and longer evenings, more of us will be venturing outdoors so I’d urge everyone to heed our advice to help protect themselves and our environment from wildfires.”

Norman Haslett, Superintendent, District Commander PSNI added: “Wildfires are illegal and the deliberate malicious setting of wildfires is a criminal offence. We hope to use these site visits with colleagues from NIFRS and DAERA to determine the cause and origin of a number of the recent fires and take the necessary follow up action.

“If members of the public have information about anyone who has started wildfires, please let the Police know by ringing 101 or contact CrimeStoppers 0800 555111. Not only do these fires cause widespread damage to our precious countryside, but they can also put lives at risk.”

DAERA staff were joined by Northern Ireland Fire & Rescue Service (NIFRS) and the Police Service of Northern Ireland (PSNI) in a series of site visits to the Mournes. There was a particular focus on investigating and assessing the impact of the wildfires in ASSIs.

Considerable environmental damage was caused to the two ASSIs. The Western Mournes ASSI being particularly badly damaged by a series of deliberate malicious fires which were started in March, with approximately 546ha of land burnt in the Spelga Dam area alone.

Any ignition source may give rise to wildfire development. Such a fire can spread very quickly, especially in areas with dead grasses, gorse, forestry and heather. Large areas can become engulfed in a very short period of time and may be hazardous to human life, property and wildlife. Many of the recent fires spread rapidly due to the dry conditions, putting the public, property, firefighters and important habitats and species at risk.

Due to concerns at the number of large wildfires in recent years as the drier and warm weather of late Spring and early Summer are now with us the DAERA is advising ASSI Landowners and Occupiers to be vigilant for wildfires and report such fires immediately to NIFRS by dialling 999.

Group Commander Mark Smyth, NIFRS Wildfire Lead said: “Our Specialist Wildfire Officers have been working in conjunction with our colleagues in the PSNI and DAERA who are leading on investigating the specific causes of the deliberate wildfires in the Mournes.

“Responding to wildfires puts an added pressure on NIFRS and our partner agencies who are frequently required to respond alongside us. Wildfires are completely avoidable and are caused by human activity. We want the public to enjoy our beautiful countryside and green spaces, but to do so responsibly.”

The public are also urged to exercise common sense in the countryside. Never leave BBQs and camp fires unattended and when finished extinguish camp fires fully and take portable / disposable BBQs home after use and be considerate in parking vehicles so as not to block access for emergency vehicles.

The public are also reminded that malicious setting of wildfires is a criminal offence and if you see anyone setting a fire you should call the PSNI immediately.

Wildfires are not natural, they are almost always started by humans either accidentally or maliciously. They put lives at risk, destroy our surroundings and the wildlife in them, and are a real cost to society.

If you are in the countryside:

Only use barbecues in designated areas and never leave them unattended;

Ensure that barbecues are fully extinguished and cold before disposing of their contents;

Never throw cigarette ends out of car windows; and

Be considerate in parking vehicles so as not to impede access by emergency vehicles.

If you see a fire:

If you see a fire in the countryside, report it immediately to the Fire & Rescue Service;

Do not attempt to tackle fires that cannot be put out with a bucket of water;

Leave the area as soon as possible; and

If you see someone setting fires, report it to the PSNI.